What a joy-filled day with a boy who beams joy most of his waking hours!

This birthday was laden with heavy meaning for us.

While we waited a month for Thomas's cancer staging results, one of which has a 40-60% survival rate versus one with a 90% survival rate, we had to face wondering if this would be the last birthday Thomas would experience. That is a profound meditation that shouldn't be reserved to when one knows a person has cancer because we're all one step closer to death every day, but grave illness has a way of putting these realities square in front of our awareness.

On a lighter but still sad note, I grieved the symbol of being unable to host Thomas's first "real" birthday party. In our family, we host parties with invited guests only on the "big" numbers, such as five years old, ten, thirteen, and so forth. Thomas knew that for his upcoming fifth birthday--which he'd been counting down to at least weekly for ten months--was going to be his First Birthday Party. Yet I knew it wouldn't be prudent to host many little guests and this symbolic loss (along with hair loss) were things that brought me to tears.

We are profoundly grateful for a birthday to celebrate and that so many loved ones found a way to join Thomas safely on his special day.

* * * * *
Thomas was up for the day at 5:30 a.m. just waiting in the dark hallway for a parent to wake up, stumble upon him, and escort him downstairs. He opened his gifts early in the morning! 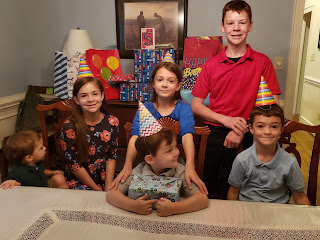 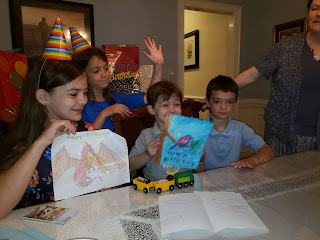 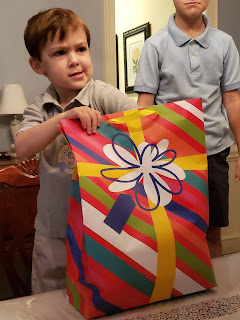 The Meaning Behind Thomas's Big Gift

One of the astonishing graces during this experience is Thomas's docility, which is not an adjective I would have used for him previously. Some close friends and blog readers may recall that Thomas YELLED EVERYTHING HE EVER SPOKE for a couple of years (until this spring), such that back in January, I actually took him for a hearing test because I thought he must have diminished hearing: nope, he had perfect hearing!

Chris and I think that Thomas's docility is one of God's graces coming from his receiving early the Catholic Sacrament of Confirmation. No matter what treatment we have had to tell him he needs, Thomas accepts it: scans, surgery, chemotherapy. Just this weekend, Thomas began taking his prescription of Septra, which is an antibiotic specifically to ward off Pneumocystis pneumonia, caused by a fungus that 20% of us are carrying at any given time, but which we can fight it off easily. However, people with a severely compromised immune system (typically those taking chemotherapy or those with HIV) will succumb to this serious illness. Thus, cancer patients take Septra for the whole duration of treatment and Thomas tells me it doesn't taste very good. However, all I did was announce cheerfully that this was a new medication he would be taking four times weekly now and he takes it, even though it requires his willpower to walk over to me and put it in his mouth. No complaints.

We have had to repeatedly take away privileges from him, such as being allowed to ride a bicycle (fall risk), play any contact sports (bruising and bleeding risk), or go to Mass and see his friends (immunocompromised). He has yet to fight us on any of this and we remain confounded. Thomas began riding a bicycle at three years old--and never used training wheels--so has long been a speedster on a bicycle. He rides better than children many years older and even does bicycling tricks. But when we told him that he would not be able to ride his bike for a long time, he accepted it and has never once tried to ride it.

Therefore, we wanted to buy him something he could ride safely in the cul-de-sac with his siblings even when he is tired from chemotherapy. Despite my declaring vehemently for the last 13 years that none of my children would ever own a ride-on vehicle--because they should be out exercising their bodies! and no kid should own a toy so expensive!--we decided to buy one for Thomas because it perfectly fits his needs right now. God laughs at my ideals! 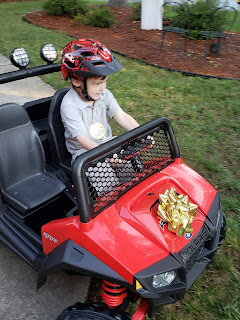 * * * * *
While Daddy supervised Thomas and his brothers riding around the cul-de-sac, John (13) made crepes for Thomas's birthday breakfast! Sugar-bomb fun! 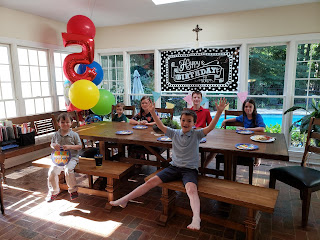 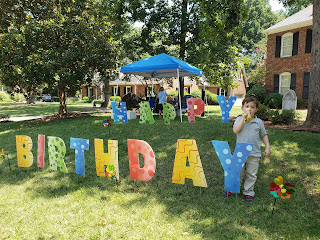 One neighbor loaned us the birthday lawn sign, another neighbor loaned us the canopy, and a third the bubble machine. I picked up pinwheels, party hats, and party horns at the dollar store. We dragged out an oscillating fan, folding chairs, and ice water to help us in the heat that was 93 degrees and 53% humidity ("feels like" index of 103). 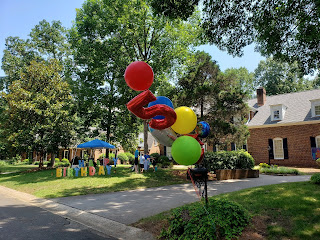 I had prepared party favor bags which contained candy (but not chocolate, which would melt), Christian stickers, straws, Thomas's sacramental holy card from his Confirmation and First Holy Communion, and personalized pencils I had made up that read, "I'm a prayer warrior for Thomas! God's will be done on earth as it is in Heaven!" 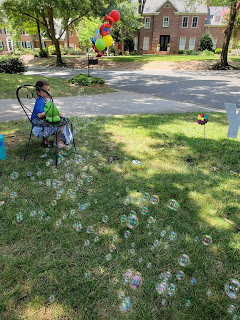 About sixty cars full of dear friends and lovely well-wishers took time out of their day to come wave hello to Thomas! Sixty! So many of you decorated your cars in fun and zany ways, dropped off cards, gifts, and homebaked goods.

We were also blessed to be visited by our local police officer and the nearby fire department! Chris had called them and, while they have stopped doing kids' parties in general (I don't know why), when they heard about Thomas's cancer, they said absolutely, tell me time and place. These guys have the hearts of heroes! 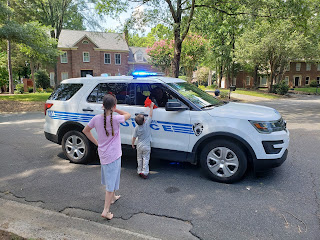 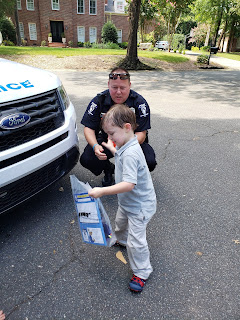 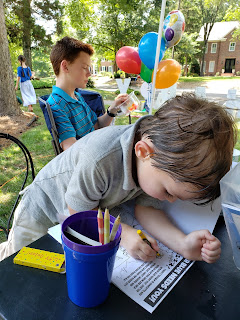 The police officer gave Thomas a kid's kit of items, including a coloring book. Thomas colors, draws, and makes art all day long (while humming quietly to himself), I'm telling you, so once he had this coloring book, he told us that he had "important police work to do" in his "office." He colored fervently and I had to pull him away each time a new car arrived. 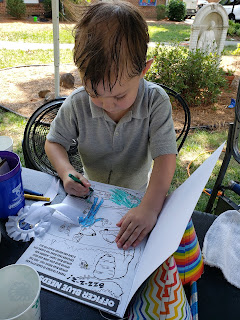 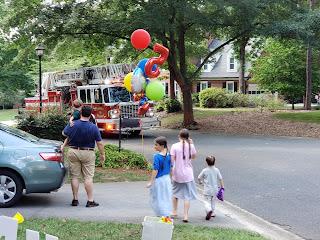 The firemen gave Thomas the patch they wear to identify themselves as part of Fire House No. 24. It's not a kid's version, but the real patch the firemen get for their uniforms when they join the fire house. 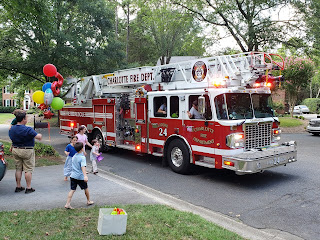 * * * * *
I was grateful that Thomas had requested take out from Cook Out (a local fast food joint) for his birthday dinner because there was no way I could cook after being in "feels like" 103 heat for an hour and a half. We lay flopped in the air conditioned den with the lights dark while watching cartoons!


We revived enough for a quick dinner and cake before nice cool baths and early bedtime for all the little boys who refused to nap today (and nighttime swimming for older siblings!).

Thank you all for making this one of the most special birthdays in our family's experience of the last 14 years.
Back to Feed
Use left/right arrows to navigate the slideshow or swipe left/right if using a mobile device