An Officer and a Mouse Dance Onto the Stage: Ten Photos from Nutcracker 2022 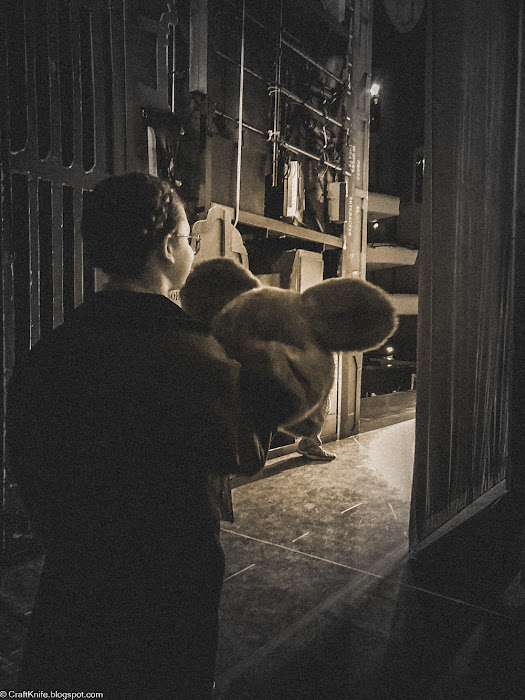 Another Nutcracker season is done and dusted! My anxiety eye twitch hasn't yet gotten the news, nor has my brain at approximately 3:00 every morning, but any moment now I'm sure all the stress of that most stressful week of the year will just magically drain away and leave me ready for some relaxing holiday cheer.

A sampling of the week's greatest triumphs and greatest WTFs:

The weirdest thing that happened, though, was the Thursday evening premiere performance. I dropped my kid off for her warm-up class, then figured I'd walk around campus for a while, get a little exercise before sitting down for two hours.
My walk, though, was super weird. Normally, the university campus is bright and welcoming, and I've spent tons of evenings moseying along the paths around the buildings and through the woods and by the creek while feeling safe as houses. But on this night, campus most strongly resembled the opening seven minutes of a horror movie. I'd be walking along a brightly-lit path, then take another step and be in a pool of absolute darkness. Thirty feet ahead the lamps would be lit just like normal, then turn a corner and suddenly I was thrust back into darkness. I took my entire walk, but I was definitely about to be murdered by ghost-wolves or skeleton creek pirates the entire time.
I circled back to the parking garage to drop off my headphones and collect my ticket, then headed over to the theater. But it just kept being weird! As I was walking out of the theater's parking garage, whole well-dressed families kept walking in, clearly having just left that same theater. Was there some kind of early sensory-friendly Nutcracker for children that had just ended, I wondered? And maybe I didn't know about it because they didn't need their starring dancers, Mouse #2 or Officer #5?
And then as I got closer, I started seeing in some of the family groups small children wearing their hair in the very distinctive bun on the top of the head, hair slicked down smooth hairstyle that the program dictates for Soldiers and Angels. But... they were all leaving the theater, as they would if the show was over and their parents had picked them up from the check-out table next to the Green Room and they were headed home.
Had... I lost time? Was I, in fact, having a mental break? Had the ghost-wolves put me in a trance every time I walked through their darkened domain? Because indeed, the front of the theater was PACKED with people, all leaving.
As I reached the theater, confused and wondering if I was safe to drive home or if my kid had brought her license or if I needed to call Matt and tell him I might have had a seizure and he needed to come get us, an usher popped her head out of the closest door and said, "Hi, are you here to see The Nutcracker?"
"Um, yes?" I said.
"It's been cancelled."
In that moment I was a parody of teenager textspeak, because I literally said, "Wut."
The bemused usher just sort of gestured around and said, "There's a power outage?"
And that was the moment that I actually looked at my own environment and noticed that oh, yes, there WAS a power outage! The theater was dark! No marquee lights, no spotlight on the two-storey Nutcracker statue in the lobby, DUH no street lights! I'd actually dropped my precious child off at a darkened theater and hadn't even noticed, had been walking in and out of the zone of the power outage for an hour and hadn't noticed the occasional building with blackened windows.
I went down to the basement to find my kid, forgetting that I own a pocket flashlight in the guise of a cell phone but still somehow by the grace of god not falling down a completely black flight of steps--yay, me!--to find SO many sobbing Soldiers and Angels at the check-out table, poor babies. My own kid was well enough, happy to have the assurance of the department that they'd find a way to re-run this canceled show.
And they did!
My teenager danced her heart out in all five performances, as well, this year, dividing her time between Team Mouse-- 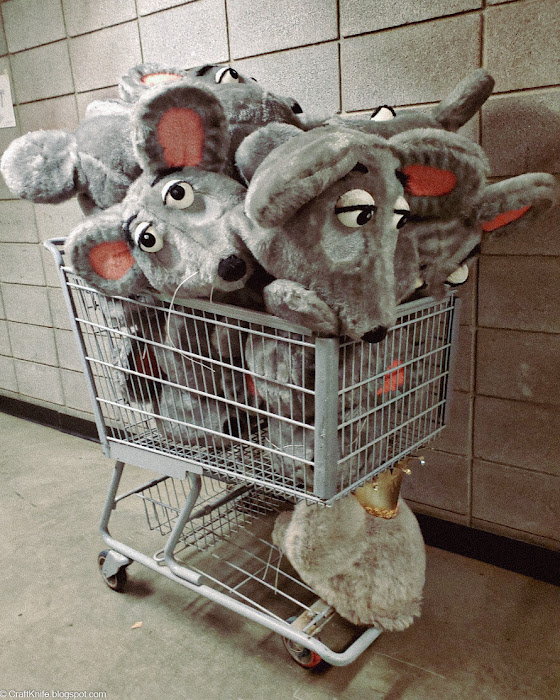 --and an Officer in the Nutcracker's army: 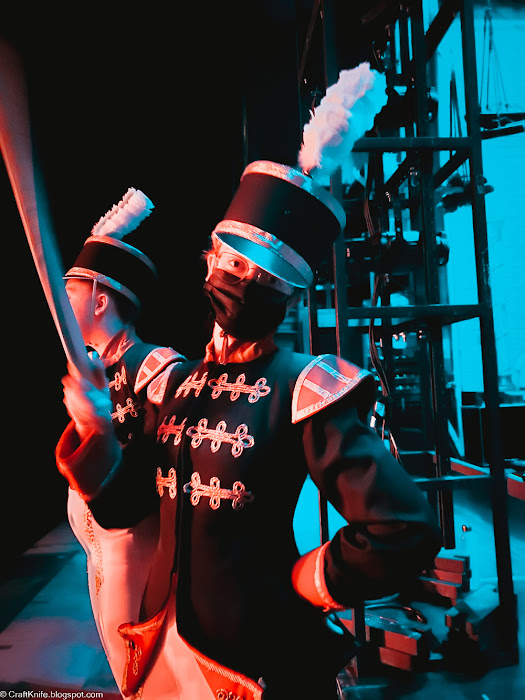 Neither role is meant to be particularly showy or special, but still. When you're an Officer, after all, you get to dance en pointe in front of an audience of thousands--
--and when you're a Mouse, not only do you do a mousely pas de deux with your Mouse partner as one of only three people on the entire stage at the time (the third being that brat Clara, and all she's doing is sitting in bed so she barely counts), but you're a guaranteed kid favorite at every intermission walk-around: 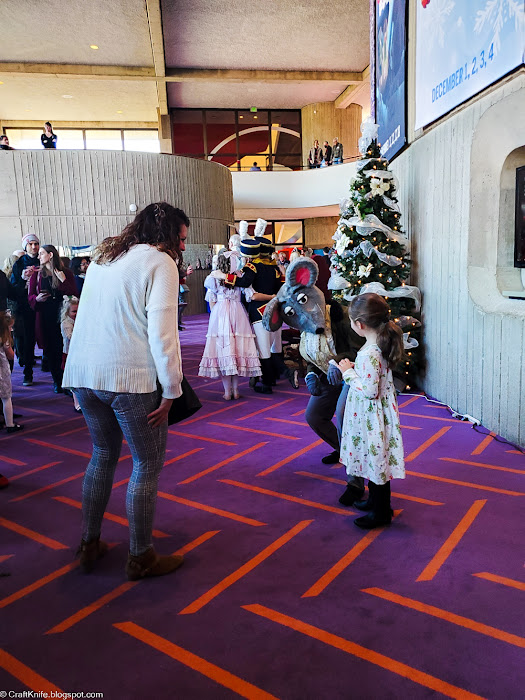 And, of course, as always, the real treasure is the friends you make along the way, so even when they make you dance in pants and a coat and a hat, or a fat suit and a giant furry head, being a Nutcracker kid is still a guaranteed ticket to the best week of the year: 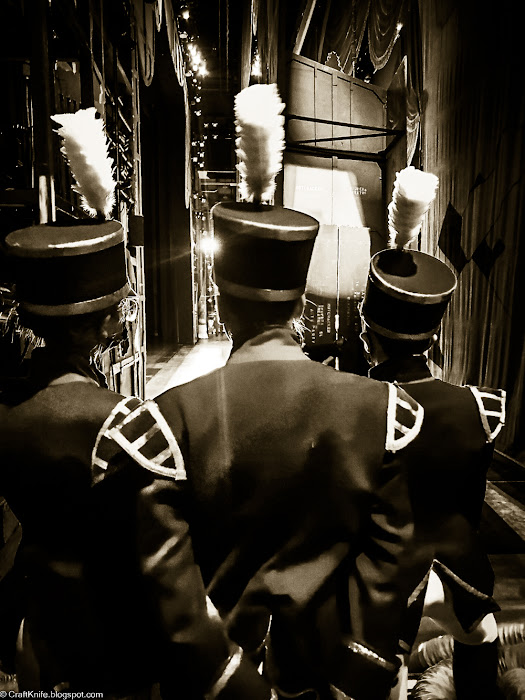 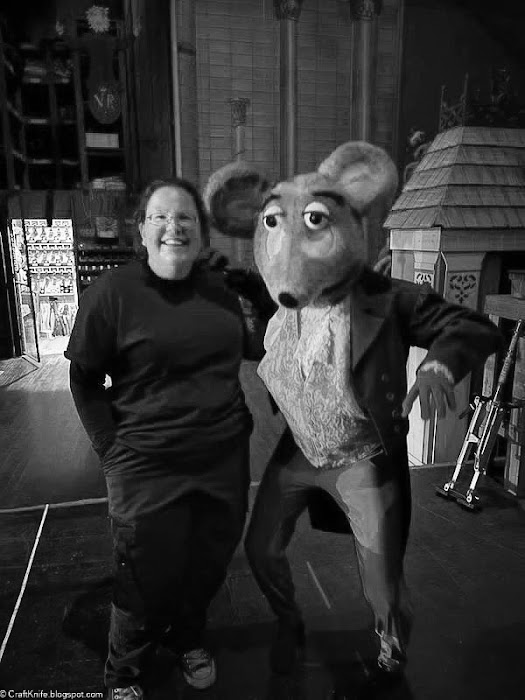 --but mostly I hung out here and there, babysitting the world's heaviest ballet bag--
--watching a succession of curtains rise and fall-- 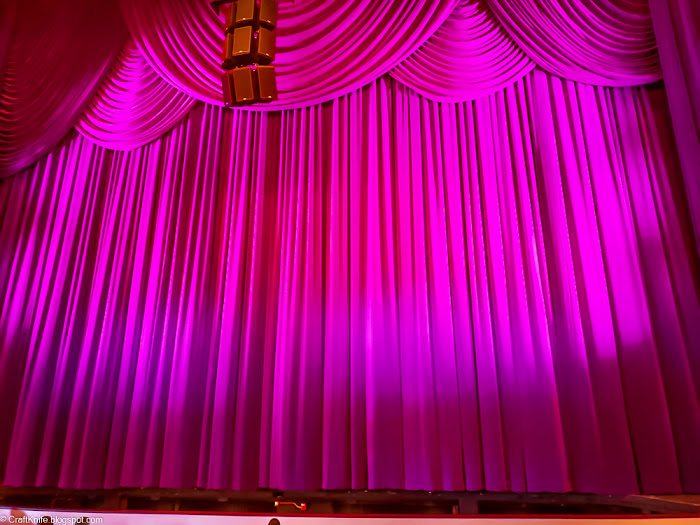 --and having an occasional glass of pre-show wine while putting my butt in a seat for five Nutcrackers in 48 hours: 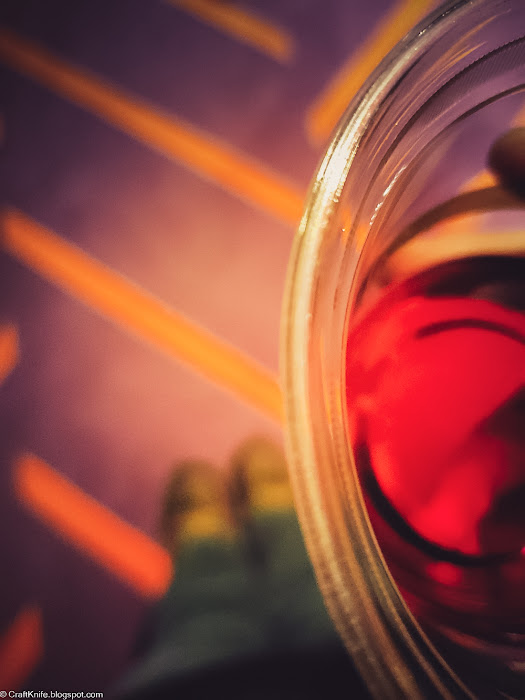 And now the kids' second-to-last Nutcracker year is over. It was messy and stressful and delightful. I love watching my kid dance, and I love seeing what a magical time she has with all of her sweet ballet friends.

Just... knock on wood for me that all those shared mouse heads are lice free, okay?