Beatlemania will never end. As the world relives the highs and lows of the behind-the-scenes chaos surrounding the recording of the penultimate Beatles album Let It Be, (thanks to the new three-part docuseries The Beatles: Get Back, streaming on Disney+ starting on 11.25) one truth remains: The music is all that matters. No matter how many times we see footage of the Fab Four — unearthed or otherwise — the reason we still care at all is because of the songs. These guys may have created more near-perfect rock and pop songs than any human beings on the planet, before or since. And when we’re introducing the Beatles to our kids, the sonic reasons matter more than the historical hullabaloo.

If you’re a Beatles hater, this list surely isn’t for you. But, if you’re a Beatles purist, someone who believes in a kind of impossible rock completism, this list probably isn’t for you, either. This list is for parents. What we’re doing is brutally ranking the Beatles’ major studio albums in order of how appropriate each is for your child and how much kids will actually like the albums.

This list mostly comes from actual experience with my 4.5-year-old daughter, who has been listening to Beatles records (on vinyl) since she was born. Any judgments I make about actual enjoyment from kids come from my experience jamming to the Fabs with her. If you have an older child, your list will undoubtedly be different. And if you don’t like the list, blame me, but don’t blame my preschooler.

With that in mind, let’s rock on George, one more time for Ringo… 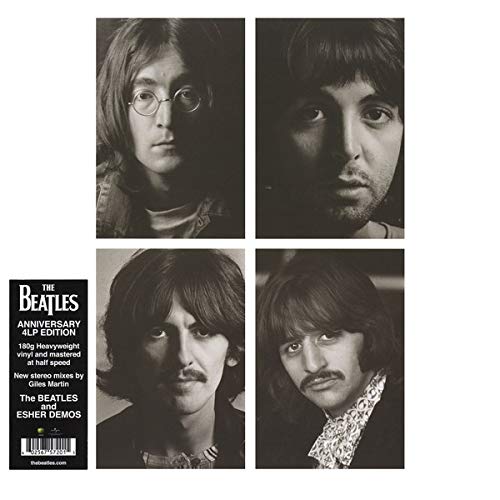 The White Album reissue on vinyl.

It was your favorite album when you were in college, and is easily the most eclectic Beatles album of them all. However, the variety of The White Album is actually what disqualifies it from being kid-friendly. Case in point, kids might love “Everybody’s Got Something to Hide Except For Me and My Monkey,” and yet, that song is followed by “Sexy Sadie.” If you cherry-pick here, you’ll find some songs your kids will love, “Ob-La-Di, Ob-La-Da,” is an obvious one. But, if you’re looking for an album to just throw on and have the family enjoy it, The White Album is kind of a minefield. Everyone loves the “Birthday” song, which kicks off side-one of the second record. However, you know it’s followed by “Yer Blues,” right? You remember, the song where John Lennon sings, “Yes, I’m lonely, want to die!”

You see the problem. For very those very small Beatles fans, The White Album only works if you’re willing to be a DJ for the whole thing. And don’t even get us started about “Revolution No. 9.” 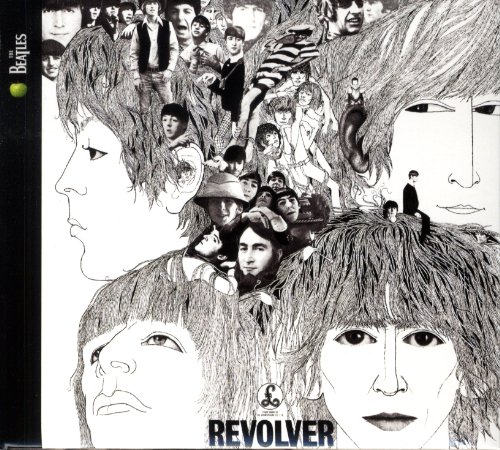 Do you know what kids don’t love? Songs about taxes and lonely old ladies who die alone. Revolver might be one of those great examples of perfect rock albums, but again, when you just throw it on for your 4-year-old, it may not be the best way to introduce them to why people love the Beatles. Yes, “Good Day Sunshine,” is on here, but that’s a bit on the nose, isn’t it? 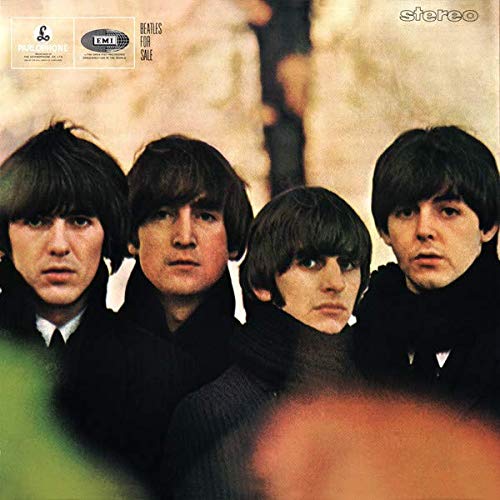 The Beatles - Beatles for Sale

Beatles for Sale on vinyl.

One rule of thumb for kid-friendly Beatles albums is that the earlier stuff tends to connect with little kids (2+) more than the later stuff. This is obvious because of history: young tweens LOVED the early Beatles. However, this is a loose rule, and Beatles For Sale is the exception. Released at the end of 1964, this album feels like the Beatles batting clean-up with a few originals and some random covers. It’s a weird album in general, and could not be any Beatles fan’s favorite record under any circumstances. Also, any album that starts off with “I’m a Loser,” and “Baby’s In Black,” is more for angsty teenagers who are about to get into Nirvana. 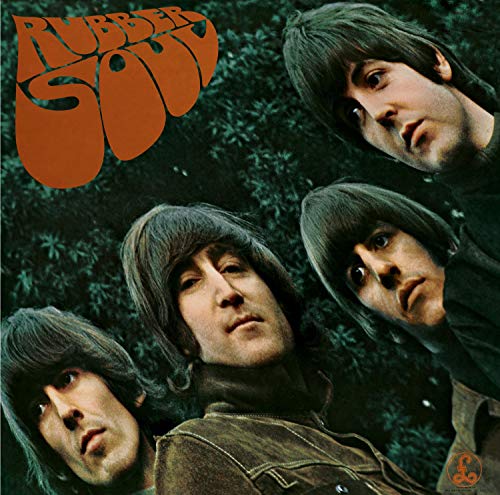 “Drive My Car” is certainly a great jam for kids. So much so that there’s even an Elmo cover version of it. That said because this album ends with the song “Run For Your Life,” in which the narrator literally threatens to kill a “little girl,” it’s had to claim this is a great one to spin — front to back — for kids. Also, “Nowhere Man” is catchy, but it’s kind of a bummer for a 5-year-old, right? 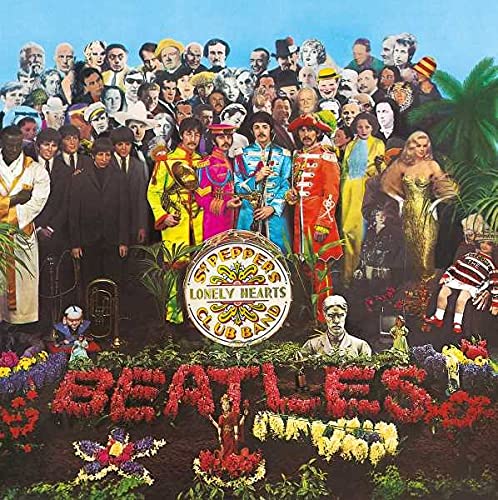 You could rank this higher. It kind of depends on the kid. No child will dislike the first two songs — the title track and “A Little Help From My Friends” — but the rest, including “Lucy in the Sky With Diamonds,” are kind of a wash for tiny ones. Plus, it’s really hard to find someone under the age of 14 who thinks “She’s Leaving Home” makes sense and/or is relatable. This album is amazing, but let’s face it, it’s kind of for olds. 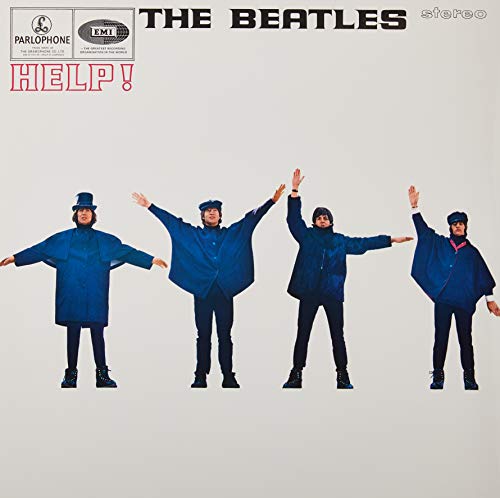 With Help, we’re passing over into the albums that are mostly big hits with kids, from our experience. The title track of Help! is a winner to be sure, but the real gem kids will probably love from this album is “Ticket to Ride.” One tip: If you have a toddler, change the lyric that says “and she don’t care,” to “and she’s a BEAR,” and see what happens. 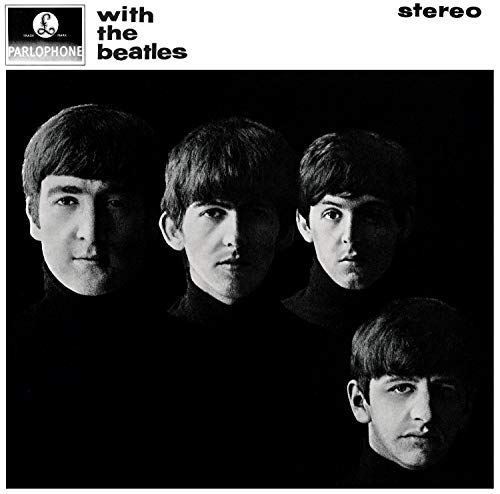 With the Beatles on vinyl.

You forgot about this one, didn’t you? Here’s the thing, for a very small child, the songs “It Won’t Be Long,” “All My Loving,” and even the underrated George Harrison track, “Don’t Bother Me,” will totally get them moving. Finally, if your kid doesn’t love “Roll Over Beethoven,” I just don’t know what to say. 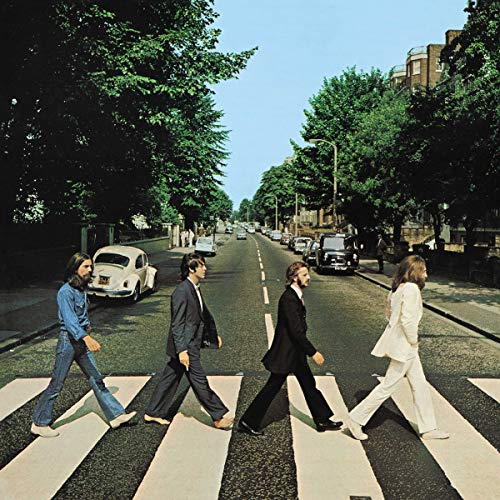 The final album the Beatles recorded. All the praise this album gets is deserved. No matter how many times we hear it, that ending medley is amazing and the love we take is still equal to the love we make. That said, other than the kind of obvious “Octopus’s Garden,” there’s no way you could make an argument for this being the best kids’ Beatles album. “Mean Mr. Mustard” is just too damn weird and he always shouts out something obscene. Great album. Definitely in the top 10. Your kid needs to hear it. But, it won’t be their favorite until they’re much older. 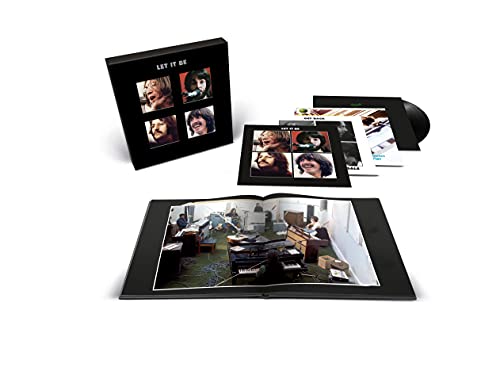 Let It Be Super Deluxe Vinyl

The new giant reissue of Let It Be.

Here it is, the final Beatles album released, and the second-to-last one recorded. It’s also the only album that wasn’t produced by George Martin and infamously was mixed by Phil Spector after the fact. Children don’t need to know these things, even if the new documentary Get Back will certainly remind us of all of that. (Maybe?) As a record for children, “Dig a Pony” works, as does the jangly “One After the 909.”

The titular track, “Let It Be” is great as an anthem, but it has stiff competition from a few more “big” Beatles songs, as we’ll see. To be clear, for fans, the new vinyl reissue is essential. 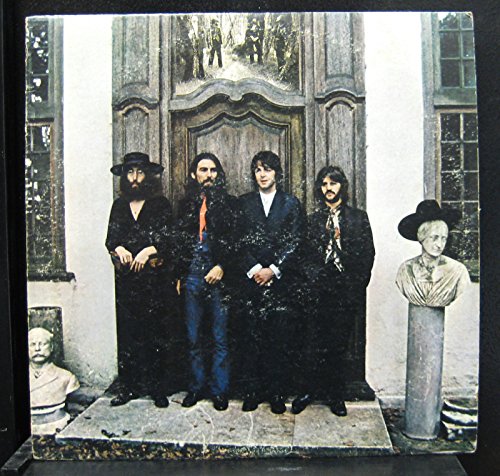 You haven’t lived until you’ve sung “nah-nah-nah-nah” with your child. Because “Hey Jude” wasn’t released on a regular album, the best way to hear it, is, arguably, on the Hey Jude EP, a kind of half-album, which consists of some random Beatles songs that you tend to forget aren’t on albums, like “Old Brown Shoe,” for example. The Hey Jude EP also contains “Don’t Let Me Down,” which while recorded during the Let It Be/Get Back sessions, wasn’t on that album, originally. Personally, my 4-year-old freaking LOVES all the songs I just mentioned, and because the flipside of this record has the fast version of “Revolution,” you really can’t go wrong. An underrated Beatles record and one kids will totally love.

This EP also collected the songs “Rain” and “Paperback Writer,” both of which are perfect kiddo sing-a-longs. (“Rain” in particular!) 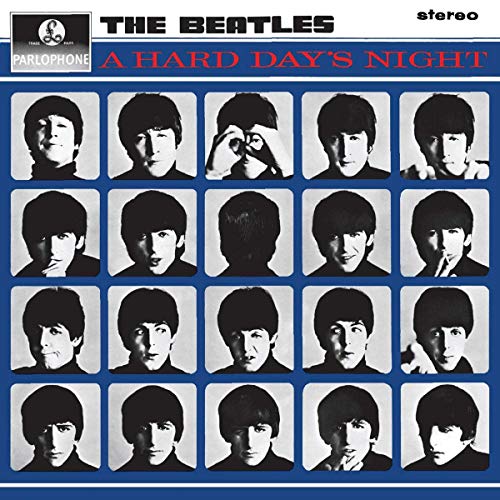 This album contains the title track “A Hard Day’s Night,” as well as “Can’t Buy Me, Love.” In the film version, the Beatles are running and jumping constantly while these songs are playing. When you play the album for a young child, you’ll instantly see why. The energy of this album is pure toddler/preschooler/elementary school child. Sure, there are some slow songs, but even lesser-known songs like “I Should Have Known Better” will get everyone moving. 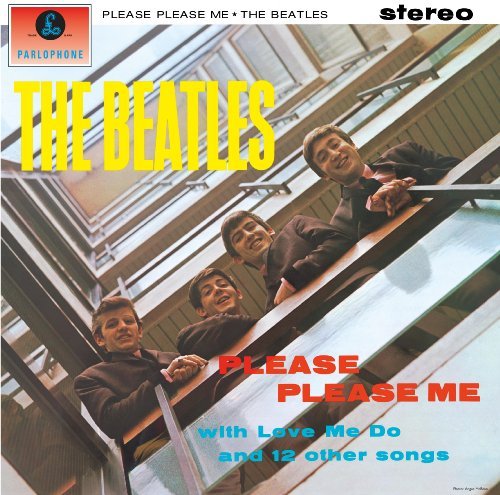 It’s the Beatles’ first full-length album, led by a single — “Please Please Me” — which is so fun to sing with a kid, it almost feels like a Dr. Seuss rhyme. This album also contains the Beatles’ famous cover of “Twist and Shout.” If you have a child who has not yet heard “Twist and Shout,” you have a child who is being neglected. At the very least, play your kind “Twist and Shout.” They may not have written it, but nobody shakes it up baby, like John Lennon. Did you know he recorded that scream without a shirt on? Doesn’t that sound like something your nutty kid would do? There’s something utterly unhinged about early Beatles records that appeal to little kids. And it’s something we forget as we get older. Those tweens were screaming and freaking out for a reason. The music is BONKERS good. (Bonus: “A Taste of Honey,” nobody’s favorite Beatles cover unless you have a kid who loves to sing it whenever she wants some honey.) 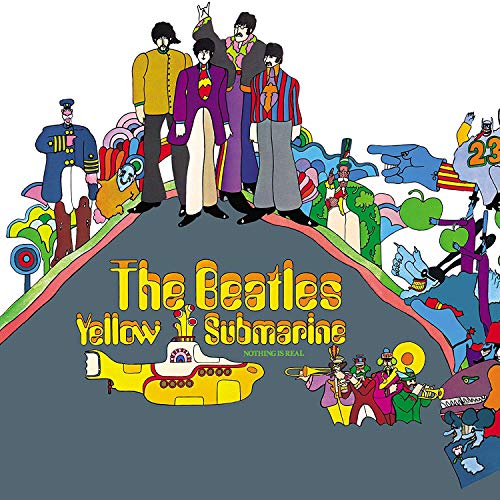 You knew this was coming. Although the song “Yellow Submarine” first appeared on Revolver, for a child, having it lead this album makes so much sense. It’s hard to argue that the second side of this album — all orchestral score from the film — is amazing. But, the entire thing is perhaps the most kid-friendly and cleanest of all the Beatles records. Plus, freaking “Hey Bulldog,” is one of the greatest jams for a kid, and if you have a kid like mine, will cause them to start saying “hey bulldog” to all actual bulldogs. This album also rocks “All Together Now,” which is basically a Sesame Street song invented by Paul McCartney. (As long as we don’t think too hard about that “can I take my friend to bed” line.)

Finally, this album cheats a little bit by slipping on “All You Need is Love,” which yes, will also end the next album on this list. 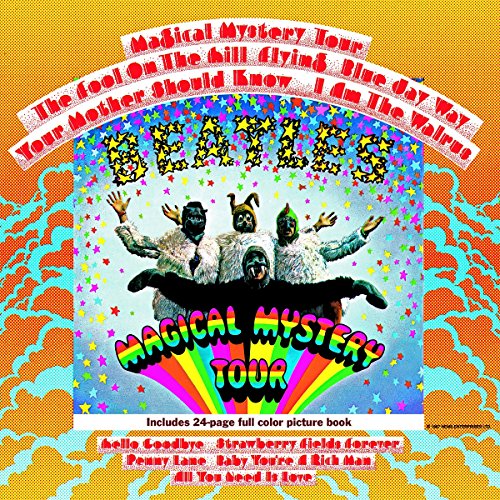 Yep. Here it is. The greatest Beatles album for kids. You’ve got: “Penny Lane,” “Hello, Goodbye,” and yes, “Strawberry Fields Forever.” The whole thing ends with “All You Need Is Love,” but not before the hilarious banger, “Baby You’re a Rich Man.” No other Beatles song mentions people keeping things “in a big brown bag inside the zoo,” which means no other Beatles album understands little kid logic as well as this album. The title track lets you know where this album is going, but nothing can prepare you for the moment when your child actually says “I am the Walrus! Coo Coo Ca Choo!”

In terms of songs that feel like they were written for kids to love and sing, Magical Mystery Tour is more stacked than perhaps any other Beatles record. And even smaller songs, like “Your Mother Should Know,” contain a kind of odd logic to them that the Fabs could have never intended at the time. Yes, when you get up and dance to a song that was a hit before your [child’s] mother was born, the lyrics are suddenly, amazingly, true.

The Beatles: Get Back hits Disney+ on November 25.