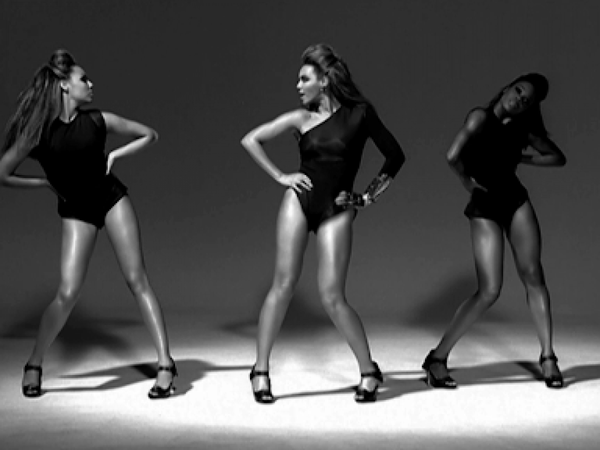 For Millenials and those in Gen X and Z, it’s hard to even imagine music without Beyoncé. Since making her debut with Destiny’s Child in 1997 when she was just 16 years old, King Bey has been simply irreplaceable, running the world — and bringing her ladies into formation while doing it.

As Beyoncé Giselle Knowles-Carter turns 40 we celebrate this iconic diva by ranking her 40 best songs. These are the tracks that have kept us crazy in love with Yonce since the ’90s and leave us craving the next time she jumps in the studio.

01Crazy In LoveThe fanfare of those blaring horns (courtesy of a sick sample from the Chi-Lites) heralded the arrival of a new queen in 2003. Reigning at No. 1 for eight weeks — and still causing delirium on the dance floor every single time that the DJ drops that beat — this titanic Beyoncé banger with boo-for-life Jay-Z was everything that the singer needed to fulfill her solo destiny.

02FormationShe took the hot sauce out of her bag and poured it all over this ferocious anthem that announced the arrival of Beyoncé 2.0 with its surprise 2016 release. (It dropped the day before her second Super Bowl halftime performance.) Celebrating both her Southernness and her Blackness, B goes hard for the ladies to join her in systematic salvage.

03Single Ladies (Put a Ring on It)There’s a ‘60s girl-group charm to that hand-clapping bounce, but this No. 1 smash is a thoroughly modern manifesto for bachelorettes everywhere: Seal the deal — or you just might get dealt to the side. Bonus points for the iconic video.

04IrreplaceableThe acoustic guitars may suggest a sad breakup song, but there are no tears on this kiss-off. Beyoncé’s longest-running solo No. 1, spending 10 weeks at the summit, it tells a cheating man exactly which way to get gone: “To the left, to the left.”

05Say My NameBeyoncé won the first two of her record 28 Grammys for Destiny Child’s 1999 chart-topper, which put the fellas on notice about running any game on them.

06Run the World (Girls)Behind a boombastic attack, complete with militaristic drums and what sounds like an army of Beyoncés, this female empowerment anthem will not be stopped short of total global takeover. Witness the woman at her fist-pumping fiercest.

07Drunk in LoveLove? More like crazy in lust on this hypnotic banger that details just how much of a naughty girl Bey can be. An all-night escapade from the club to the kitchen, it finds her grinding, swerving and surfing all up on her gust-rapping hubby.

08FreedomThis declaration of liberation from Lemonade — featuring no less than Pulitzer Prize-winning rapper Kendrick Lamar — stomped all over the ghosts of Beyoncé’s past in 2016. No longer was she willing to be beauty-pageant perfect, smiling and keeping it cute while steaming inside: The fire — and the freedom — was furiously unleashed.

09Love on TopShe played a Diana Ross-like character in Dreamgirls, but it was on this 4 bop that Beyoncé really captured the silky essence of her girl-group-to-solo-superstar forebear. Miss Ross, though, could never blow like B on this old-school R&B jam.

10Independent Women Part 1This Charlie’s Angels anthem for “all the mamas who profit dollars” — which hit that No. 1 money for Destiny’s Child in 2000 — is B’s longest-running chart-topper on the Billboard Hot 100: 11 weeks.

11SorryThis unapologetic FU from 2016’s Lemonade grabs its crotch while thrusting its middle finger in his face. She ain’t sorry — not one lil’ bit. Hell nah.

12PartitionIn the first half of this Beyoncé track, a sexed-up Yoncé flaunts her rap skills. The second half channels Erotica-era Madonna atop a thrusting bass line. This is Mrs. Carter at her edgiest and most explicit.

13Baby BoyBeyoncé’s 2003 No. 1 single with reggae star Sean Paul is made for grown-up grinding. No doubt, there were a bunch of baby boys — and girls — created after bumping along to this in the club.

14BootyliciousRocking a sample of Stevie Nicks’ “Edge of Seventeen,” this fat-bottomed groove shook all that jelly straight to the top of the Billboard pop charts in 2001.

15If I Were a BoyOne of her few hits that she didn’t have a hand in writing, this folk-flecked ballad was nonetheless owned by Beyoncé. Stripping away all the diva attitude and revealing a vulnerable soul, it shows our goddess may be part human after all.

16Hold UpSampling the ’60s pop hit “Can’t Get Used to Losing You,” Beyoncé infused this Lemonade track with a double dose of hip-hop and R&B, turning it into a contemporary callout that would stop any bad boy in his tracks.

17SurvivorAs Destiny’s Child went through a gossipy revolving door, going from a quartet to a trio — welcoming Michelle Williams in the process — Beyoncé’s girl group let all y’all know on this 2001 smash that they weren’t gon’ give up. No way, no how.

18HaloThe I Am … half of 2008’s I Am… Sasha Fierce let B explore her pop side more than ever before, and this blissed-out ballad showcases the singer at her most angelic, floating through the heavens with a chorus that will never come down to earth.

19Get Me BodiedFor generations to come, there will be Black folks at cookouts, family reunions and wedding receptions dropping down low and sweeping the floor with it, doing the “uh-oh” and patting their weaves — whether they have one or not. All because of Beyoncé.

2003 Bonnie & ClydeWe already knew that Jay-Z was gangsta, but Bey showed that she was down to ride with Hov — and keep the getaway car running. And it’s a theme of their ride-or-die romance that they’ve kept living since this song announced them as that forever couple in 2002.

21Bill, Bills, BillsEven as a teenager, Beyoncé — a co-writer on this, the first No. 1 hit for Destiny’s Child in 1999 — knew better than to tolerate a scrub with no dough.

22Savage RemixIt was a case of game recognizing game when Beyoncé gave her Houston homegirl Megan Thee Stallion the ultimate co-sign by jumping on the remix of “Savage” that took the song to No. 1 in 2020. The result, with a rapping B getting in touch with her most ratchet self, was also a Grammy-winning collab.

23Check On ItBeyoncé mixed it up with two different rappers — Slim Thug and Bun B — on two different versions of her 2006 No. 1 hit originally made for her movie The Pink Panther.

24Me, Myself and IA song from 2003’s Dangerously in Love that spoke directly to “all the ladies,” this track reminds us all of exactly we got in the end. You feel her?

25Deja VuIf it weren’t for the insanity of 2003’s “Crazy in Love,” this 2006 Bey and Jay joint might have gotten more love. But with its shades of Michael Jackson’s Off the Wall — and off-the-charts chemistry between the two honeys — it may be one of the most underrated songs of Beyoncé’s career.

26FlawlessWhen you can coin an iconic phrase like “I woke up like this,” a song has already done the damn thing. But that this Beyoncé manifesto also sampled the “We Should All Be Feminists” speech of Nigerian writer Chimamanda Ngozi Adichie demonstrated that B was operating on a whole ’nother frequency.

27BlowAll of our Beyoncé-meets-Janet dreams came true when Mrs. Carter channeled Ms. Jackson on this raunchy roller-skating jam — from 2013’s self-titled set — that, indeed, turned us all the way out.

28Naughty GirlThis 2004 hit seems pretty tame now compared to future Beyoncé bangers like “Blow” (see below) and “Drunk in Love,” but the slinky sexiness of B — cooing a bit of Donna Summer’s “Love to Love You Baby” along the way — still never fails to ignite that “burning flame.”

29CountdownHow this was not a bigger hit from 2011’s 4 will forever remain a mystery. But you can hear the adventurous beat-making — and rule-breaking — that Beyoncé was embarking on that would be fully realized on 2013’s self-titled set and 2016’s Lemonade.

30Jumpin’ Jumpin’A hit from The Writing’s on the Wall, this Destiny’s Child jam demonstrated musically — and double-downed on it lyrically — that the ladies could leave their men at home and make the jumpoff happen without them. It’s 11:30 and what??

31Don’t Hurt YourselfThat title says it all. The rock-edged righteousness in this Lemonade highlight — featuring the White Stripes’ Jack White — made it quite clear that B knew and was ready to fiercely protect her own worth: “Who the f—k do you think I is?/You ain’t married to no average bitch, boy.” A whole word.

32DivaYou could see Beyonçé owning — or, better yet, redefining — what it meant to be a diva on this street anthem. She was a female boss, rocking it to a Lil Wayne “A Milli”-type beat with more swag than the boys could ever have.

34Lose My BreathIn a way, this — Destiny Child’s last great single in 2004 — was a predecessor to the armed-forces assault of her solo single “Run the World (Girls)” in 2011. Seventeen years later, we’re still trying to keep up with that wicked, hair-whipping beat.

35Sweet DreamsThis eerie electro-dance groove from 2008’s I Am…Sasha Fierce showed that, if she wanted to, Beyoncé could out-Gaga Lady Gaga. Ironically enough, the two divas would end up pairing on a “Video Phone” remix and then “Telephone.”

36Dangerously in LoveBeyoncé felt this song so hard that she recorded it twice — first, for the 1999 Destiny’s Child album The Writing’s on the Wall and then for her 2003 solo debut, which she even called Dangerously in Love. And you can hear that her heart is all in on this epic R&B ballad.

37Black ParadeB earned some 2021 Grammy love for this Black Lives Matter anthem, winning for Best R&B Performance. But speaking to her people with this ancestor-embracing statement — released on Juneteenth of 2020, following the deaths of George Floyd, Breonna Taylor and more — was the real victory.

38Daddy LessonsShowing that she is very much a Texas girl with those Houston roots she’s been repping from the very beginning, Beyoncé got down with her country side on this Lemonade ditty, which also nodded to the fact that her father, Matthew Knowles, had such an impact on her early career. The track ended up with so much Nashville cred that Yoncé even performed it with the Dixie Chicks at the 2016 Country Music Association Awards.

39Brown Skin GirlThis ode to melanin-blessed beauties from 2020’s Black Is King visual album has to make this list for getting the first co-writing credit for B’s daughter Blue Ivy, 9, and even scoring Bey and Jay’s firstborn her first Grammy win too.

40ListenThis Dreamgirls ballad went on to score a Best Original Song Oscar nomination in 2007. And when Beyoncé, as a disrespected Deena, sang it from her very soul in the movie musical, she was the voice of every Black woman who ever wanted to be heard — by her man or The Man.