C U at home

How Le Gym can help you stay active 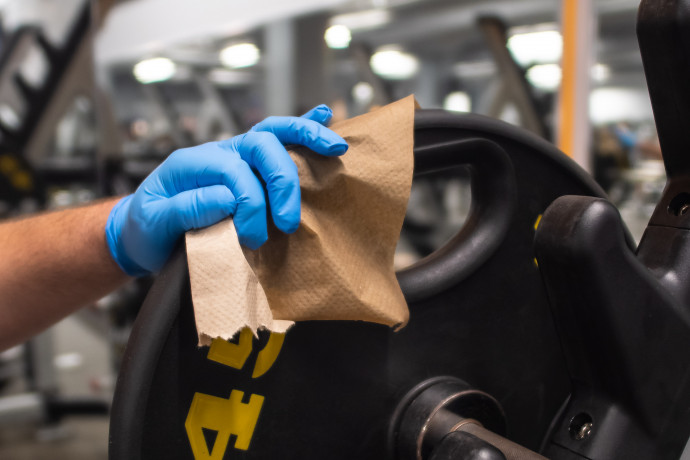 Concordia will be offering workouts and fitness activities to follow from home. Photo Esteban Cuevas

“How do you make a writer exercise?”

Though it sounds like the setup of a bad joke, I used to ask myself this question all the time, usually while frowning at a particularly sinister reading on a scale or, more often, staring down into a bag of fatty, greasy chips. Like most questions writers ask themselves, I figured I could think up all sorts of clever ways to answer it. As it turned out, there were really only two answers: one long, one short.

The short answer? You can’t.

The long answer? You get your best friend to buy you a membership to your local gym, drag yourself there three times a week, and hope the routine sticks.

In my case, that friend was Michael, the sweetest guy I know, the gym was the Econofitness near the Atwater metro, and, against all odds, the routine really did stick. Starting our first workout together by saying “You’ll have fun, I swear!” was a brilliant lie—I left the gym that day feeling like my limbs were made of jelly—but the craziest part was after a couple of weeks, it wasn’t a lie anymore. Fitness had become a part of my life, and though it wasn’t a match made in heaven, it was here to stay.

Nowadays, without my workout buddy, I find myself asking that question all over again, for reasons that are evident to anyone who’s used to exercising in a gym.
At the start of March, Michael pushed me to get a membership at Le Gym. I thought he was being overly optimistic—the proverbial ink hadn’t even begun to dry on our university applications—but it was only a week later that I’d realize how right I would end up being.

On March 12, I received an email from Le Gym asking its members to clean workout equipment before and after using it. “In the event of the university closing,” it read, “Le Gym will also be closed for this period of time.” A day later, Le Gym sent a second email—the subject read: “Le Gym Closed March 14 to March 29.”

Since then, that deadline has been well overshot—for good reason, obviously: Concordia’s doing its part to help stop the spread of COVID-19. But that still leaves us fitness freaks with no recreational facilities, no gym, and no in-person fitness classes.

Still, I’m nothing if not persistent. So one particularly hot summer evening in June, Michael and I hopped on Messenger, started a video call, and together browsed Concordia’s website to see how Le Gym was faring online.

It’s doing surprisingly well. Concordia’s Department of Recreation and Athletics posts workout videos that students can follow at home. On Instagram, the hashtag #cuquickhits sends you to a decently long list of workouts that strike a good balance between training your muscles and getting your heart rate up. I’ve done some of them, plus or minus a few reps (usually minus), and they’ve helped me feel less cooped up while I’m stuck at home. Besides, now that most people’s daily commute consists of a walk around the block, it feels great to get up and move instead of spending all day on the couch.

“The important thing is that students have answers when they ask ‘How can I be active? Where can I meet people? Where can I get involved?’” —_Michelle Dodds_

Michelle Dodds, manager of campus recreation, told me more. In the fall, the recreation department will be posting Strava challenges, cardio-based workout goals that can be set using the Strava app’s built-in goal feature. For people craving something more competitive, the department is also holding an esports tournament in lieu of intramurals.

So went my routine. I followed the instructions of a pre-recorded personal trainer or read off a list of exercises until my lungs started to feel that familiar burn, and the curse of the jelly limbs came back to haunt me.

Just like the rest of quarantine, though, exercising by yourself can get pretty lonely after a while. Even though fitness had come back into my life, Michael’s company hadn’t. After a month or so of working out on my own, I had to admit that it was much easier to exercise with a friend egging you on. I was starting to get lazy again; instead of counting reps or sets, I had begun to count minutes, running down the clock until enough time had passed for me to drop my weights and pat myself on the back for all the work I had done. Who was I kidding? I wasn’t pushing myself. For that, I needed real human connection.

Staying in touch hasn’t only been a problem for members, though. In light of the pandemic, the recreation department has been trying to figure out new ways of reaching out. “The university has rules for branding and other general guidelines,” says Dodds, “so the only place we have to connect with students is the university website.”
Working within these limitations, Concordia’s rec staff often find themselves taking part in a broad range of school events in order to promote their new activities. For her part, Dodds will be getting involved in this year’s online orientation.

“If people come to orientation, they’ll learn how to stay healthy and meet new people,” she said. “There’ll be a big focus on the active living part of being at uni, because it’s an important aspect of student life that often isn’t talked about as much.”

In terms of staying connected throughout the school year, Le Gym is currently offering online classes via Zoom. While an at-home camera setup might not be as practical as weights or a dance studio, online classes offer a cheap, easy way to get in touch with other students looking to stay in shape. There aren’t as many options as before—Latin dance classes aren’t as easy to pull off on a dollar store yoga mat in the middle of your living room—but there’s still a wide variety. Pilates for flexibility, interval training for those who like a challenge, and Zumba classes if you’re really missing that Latin dance music.

As of Aug. 26, students have been able to register for fitness classes during the fall semester, and several new classes have been added, such as meditation and interval training.

Ultimately, both Concordia recreation and its members will have to adjust to the change in their own way. Before quarantine, I made it a point to visit the gym whenever I felt restless, or even anxious, and after a good workout I’d feel great, like I was celebrating what my body could do. I liked celebrating with friends. Some people might not, and that’s okay.

“The important thing,” said Dodds, “is that students have answers when they ask ‘How can I be active? Where can I meet people? Where can I get involved?’”
So even though I won’t be rushing back to the gym with Michael anytime soon, it’s nice to know that working out with him is only an online class away. I just hope he picks an easy one.