Hustling During the Depression: Meet the Gold Diggers of 1933

The setting is New York City. Broadway. Gold Diggers of 1933 (released in the titular year) opens with a musical number, gals in gilded coin-covered costumes dance a kaleidoscopic in-sync fantastical dream to “We’re in the Money” (it’s a Busby Berkely joint after-all). It’s all glitz until the police arrive. The rent hasn’t been paid and the sheriff has issued that the show be shut down, and despite the great depression still lingering there is no rent-freeze in sight.

The pack of hustling show-girls gather to ruminate, all out of work. “The shows close before they open, says one girl to another. “The depression, dearie,” another sighs.

This musical, a pre-code, sassy romantic comedy, delivers on the fantasy any depression era viewer would want to get lost in, especially during an economic crisis: beautiful stage sets, catchy songs, wise-cracking gals (always showing leg) and the promise that a hustling gal can still secure a sugar daddy, even in uncertain times. The film doesn’t deny the depression, our three main protagonists (Polly, Trixie and Carol) live together, sleeping in the same bed, stealing milk from a neighbor, reminiscing about the days Park Avenue was littered in mink coats, back when men were lavishly spending. There’s a note from the landlady. “Sorry to bother you three stars but how about that rent?”

It’s in this scene that the girls get a call from their friend, Fay, who brings good news: Barney’s putting on a show and it hasn’t been cast yet. It’s true, there’s going to be a big show, like the good old days.

Barney arrives to the apartment, chewing through a cigar with a transatlantic accent, he’s going to cast all the gals: Carol will be featured, Polly coming out of the chorus as the romantic lead, Trixie as comedic relief, but “say, what’s that song?” From the window a somber and bitter tune floods the room, the kind of music lifts the spirits by recognizing a universal sadness. It’s coming from Polly’s crush, the piano-playing Brad. “That’s it,” says Barney. “That’s what this show is about. The depression. The depression, men marching, marching in the rain. Carol will sing it. A blue song. It’ll tear their hearts out.”

There’s only one catch: Barney doesn’t have any money for the show. But in a twist, piano-Brad promises he can come up with the cash by tomorrow. How? No one knows. But it’s Broadway, baby and the show must go on.

And the show is spectacular. An upbeat number, “Pettin’ in the Park” continues Polly’s love interest in Brad to the stage, and shows just how much fun cinema had with innuendo, just a couple of decades before the Hays code forced married couples to sleep in separate beds on screen. The extended dance scene is a dream-like sequence, a repetition of couples endlessly writhing in the Summer grass before a rainstorm comes and all the girls run, lifting their skirts, to change, naked silhouettes behind a screen, a naughty baby slowly pulling the cord to lift the shade on their nudity.

After Brad ponys up the money for the show, the girls see a newspaper item about a bank robbery and assume he’s the culprit. Polly doesn’t seem to mind too much that her beau turned to criminality for their love (and art!) but as the initial rave reviews for the show come in, it’s revealed that Brad is from a very wealthy Bostonian family. 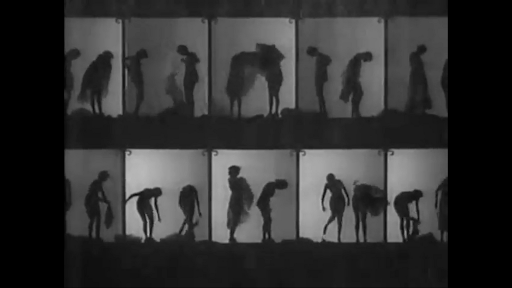 When the newspapers out Brad for being in a Broadway show, his mustachioed brother and monocle-wearing uncle come to save him from this new public image, demanding he leave the show and this floozy, Polly. The Rockafeller types go straight to the shared home of our hustling heroines, where a scam unfolds: Carol is mistaken for Polly and, with the aid of Trixie, the duo take the two men on a ride.

Gold Diggers of 1933 is in every shape and form the original Hustlers. The girls set up a situation in which J. Lawrence believes he has deflowered Carol, still posing as Polly. When he wakes up, horrified by his lack of memory of the night before. Trixie enters the room and begins to extort him for serious cash. J. Lawrence, mortified, recoils from the prospect and tries to negotiate a fee. Trixie is incredulous when faced with the pushback and responds “What do you think Polly is? What do you think this is? This isn’t a hotel room.”

But, this is a Hollywood movie and there is a Hollywood ending in sight. Trixie reveals she has played the fake identity card, “I never told you my name was Polly.” The couple fall in love. Each of our golden girls will snag a rich man and a richer happy ending. Trixie gets the easy-to-fool tuxedo wearing uncle. Polly falls into the arms of the piano-playing Brad.

Berekley’s acute eye for detail and grander bring us into a spectacle that must be seen to be truly understood. In a few more kaleidoscopic, beautiful staged choreography numbers, we are given the picturesque ending of our dreams: each woman has become fulfilled and loved—until the curtain is once again pulled open to reveal the last hurrah of the film.

Fay performs the final number, "Remember My Forgotten Man"—as the only woman out of the foursome to not secure her bag. Scantily clad, she leaves her home on the production stage into the night and leans against a lamp post.

She sings about her lover, implying that he has died within the war, singing: “A woman's got to have a man/ forgetting him, you see/ means you're forgetting me.” Here we have the reality, not the Hollywood fantasy, about being a woman in the early 1930s who without the financial stability of a male counterpart, turns to sex work.

The glitz and glamour, the $75 hats, and purebred puppies have vanished leaving the authentic reality of the lived female experience, heightened with the insecurity of the depression that resonates today. The true ending of the film is a well-executed and thoughtful foray into the lives of women who are forgotten. In a time when things are financially uncertain, both the fantasy and the gravity of Golddiggers of 1933 feels especially poignant.