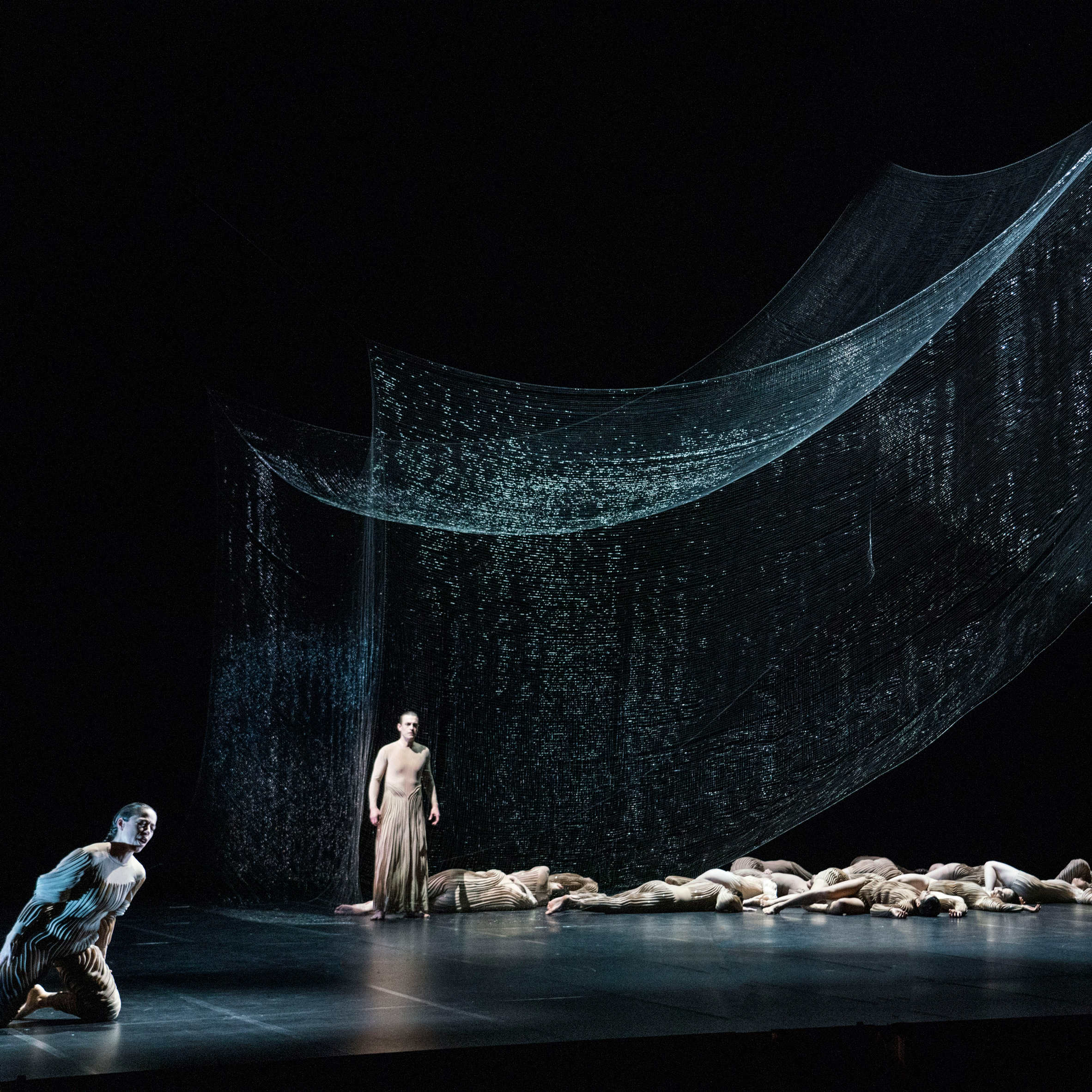 Studio Drift has created Ego, a kinetic sculpture made of 10 miles of ultra-fine nylon, for the Dutch National Touring Opera's production of L'Orfeo.

The installation hangs above the heads of performers and changes shape to represent the inner world of the characters on stage.

Sometimes it appears solid, and at other times as fluid as water a result of its hair-thin nylon threads being pulled from eight corners. 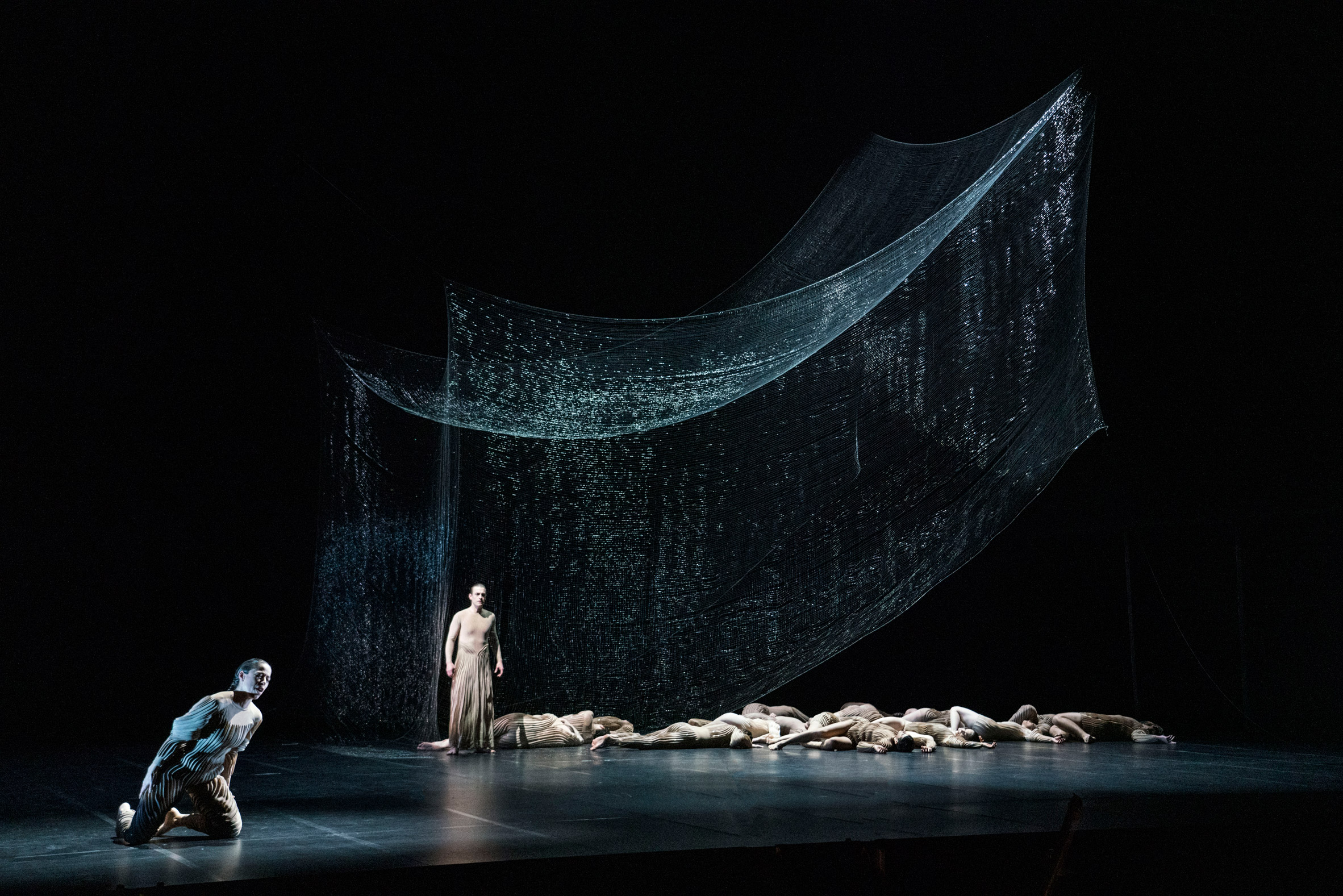 L'Orfeo is a co-production of the Nederlandse Reisopera (Dutch National Touring Opera) and artist collective Studio Drift, who are known for their large-scale installations.

The collaboration came about when the opera's director, Monique Wagemakers, decided to stage the show as a "gesamtkunstwerk" the term for a piece of art that makes use of all or many art forms. 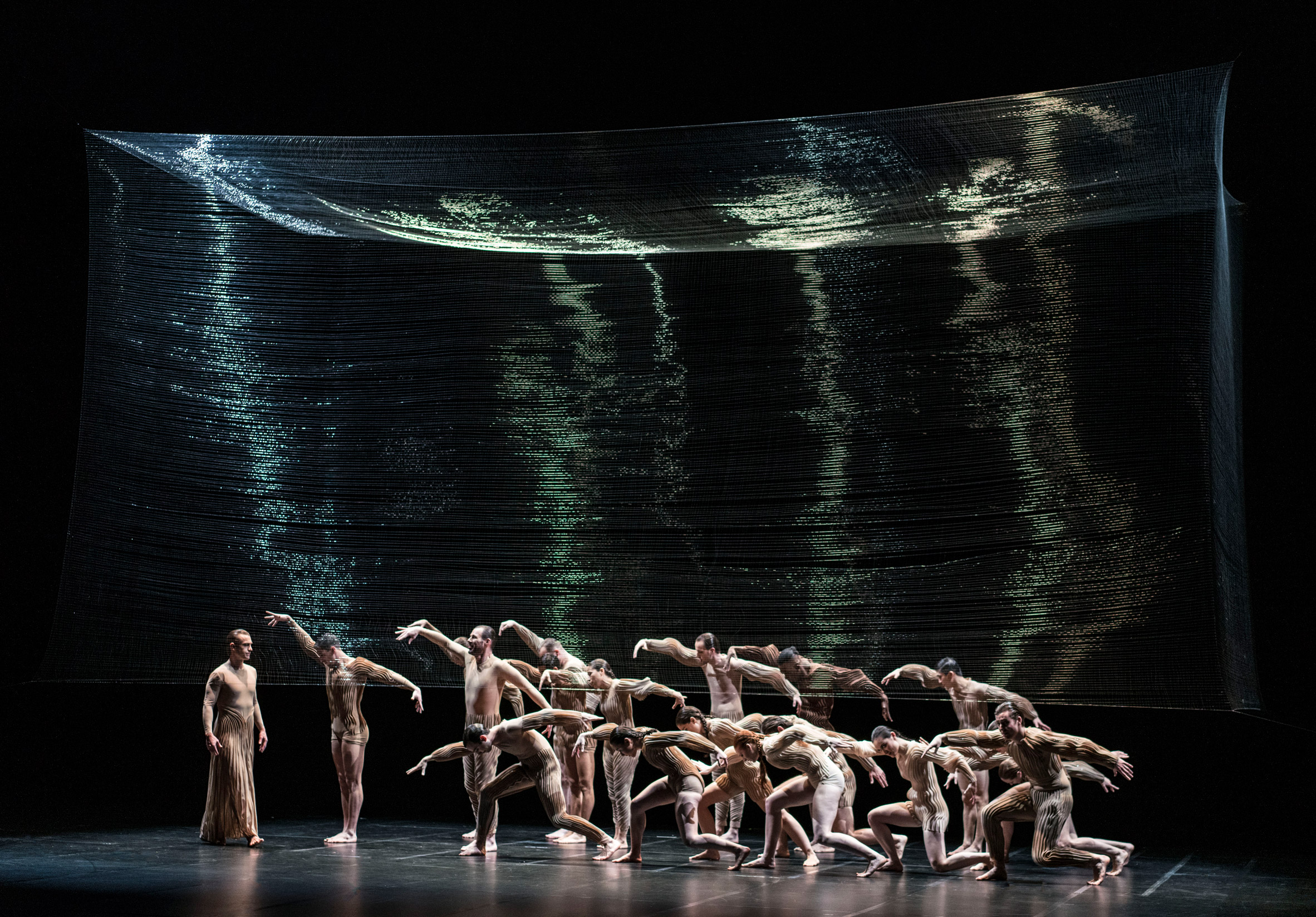 Wagemakers worked closely with choreographer Nanine Linning and Studio Drift's Lonneke Gordijn on the concept, which they said required that they rethink their usual way of creation.

"In this process we enhanced each other, puzzling together to sculpt an experience where dance, music, voice, sculpture and technology become one voice," said Gordijn.

The trio wanted Gordijn's sculpture to flesh out the main character Orfeo's inner journey as he goes from being "stuck in a rigid perspective of love and life" to becoming "a better version of himself when every pillar and ground around him collapses".

Gordijn was attracted to the idea of using a block, which she considers as the ultimate man-made form due to its rigid lines, angles and static state qualities also reminiscent of books, houses and bricks.

To make this shape more fluid, she constructed it out of hair-thin reflective Japanese fluorocarbon thread, similar to fishing line. 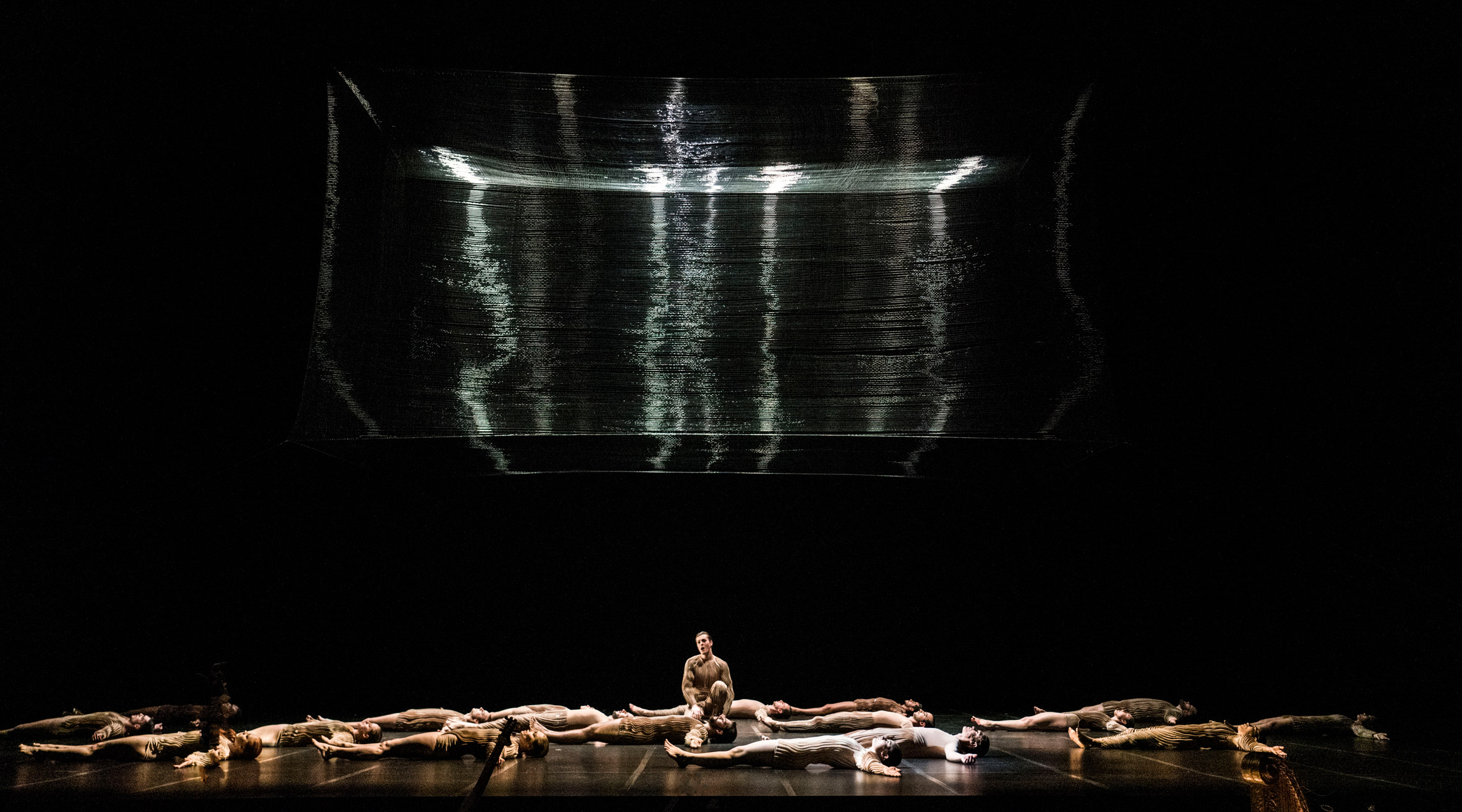 There are 10 kilometres of the thread, suspended in a rectangular prism shape. Such is the scale of it that Studio Drift had to develop their own weaving loom to create the sculpture.

The shape shifts with the movement of eight motors one at each corner so it can take different forms and appear rigid or loose. A puppeteer is tasked with controlling Ego through software. 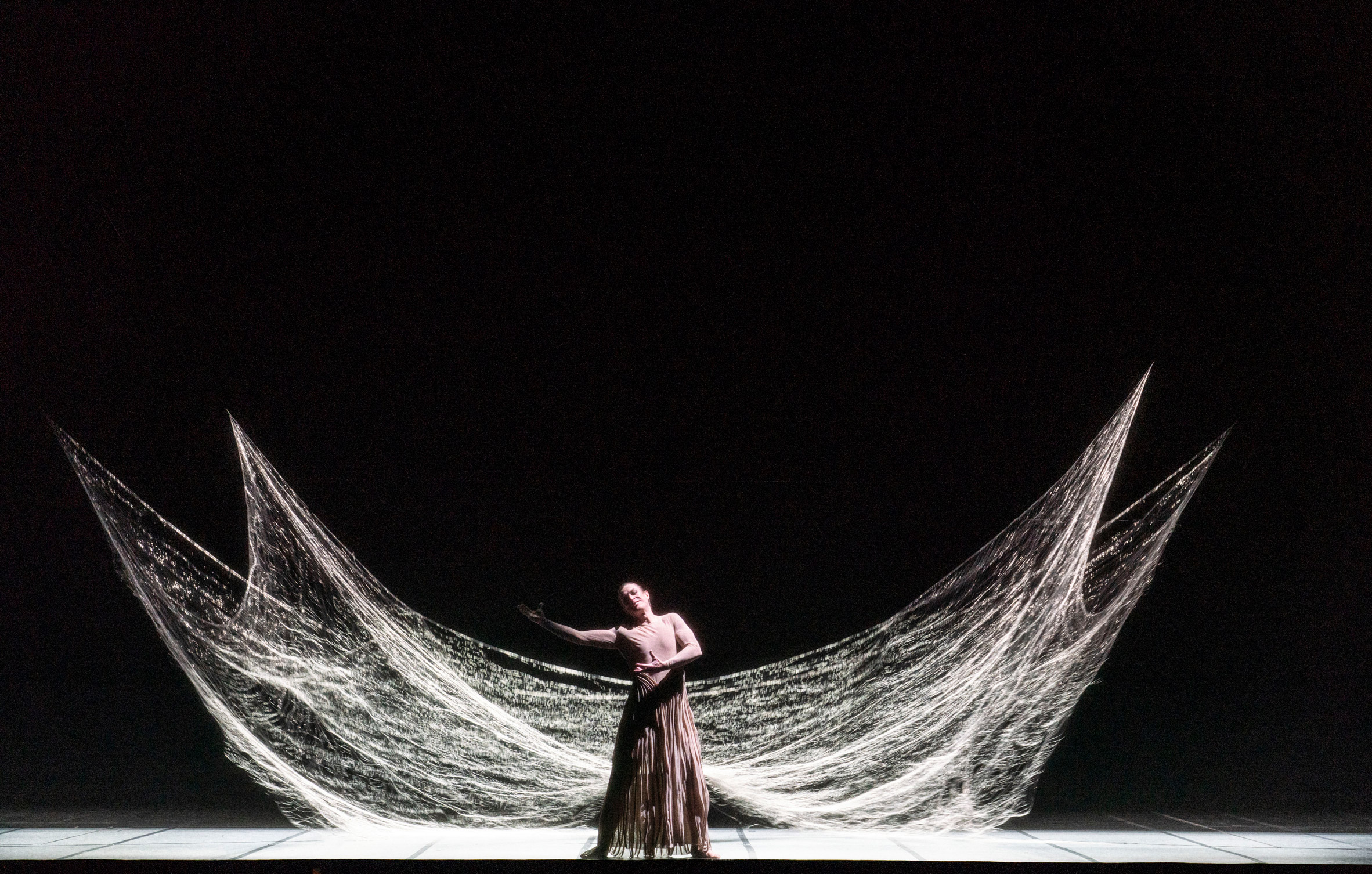 Gordijn said she enjoyed conceiving an artwork that could make an impression on a theatre audience, who, unlike those in a gallery setting, sit in one position.

"Another world is created in which an entire group is immersed simultaneously," said Gordijn.

"Techniques can be used that create visual effects that are impossible in a 'real' situation. Stimulating all the senses with amazing power and impact," she added.

"It was a delight to be introduced to this new world and I feel inspired to explore in more depth how we can bring and audience through an emotional journey with artworks outside of the theatre or gallery space." 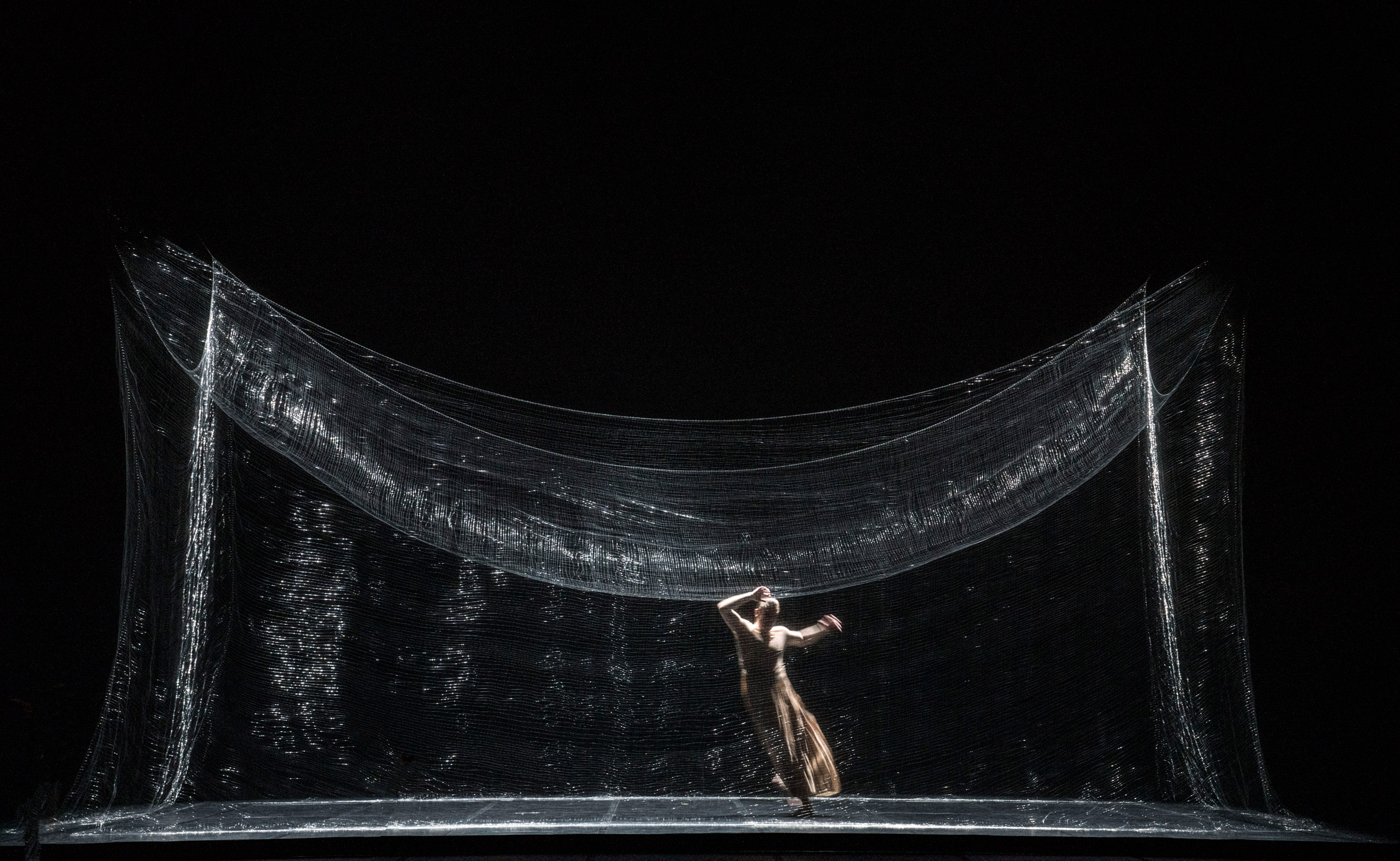 L'Orfeo is the oldest opera still performed to this day. It was composed in 1607 by Claudio Monteverdi.

The Nederlandse Reisopera's production premiered on 25 January and plays until 22 February 2020.

A different version of Ego will appear at PACE Gallery in New York City during the Armory show in early March.

Founded in 2007 by Gordijn and Ralph Nauta, Studio Drift is based in Amsterdam. One of their most famous works is Franchise Freedom, a flying sculpture of 300 drones.

Among their other recent works is Materialism, an installation of 3,000 blue blocks, which each represent the plastic used to make an individual supermarket bag.