The Bank of Bob 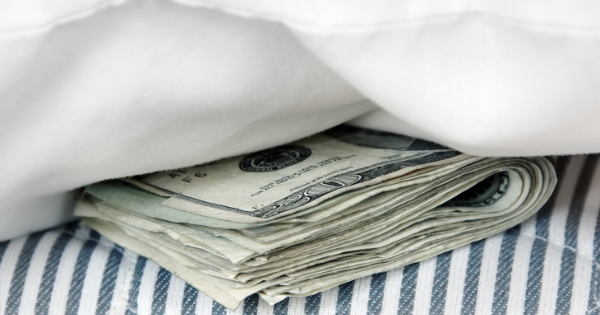 September 2013, Bob was in the hospital for observation for a few days after having his pacemaker upgraded. Back then, you dialed a phone number and held the phone up to your chest and magically a reading was sent to the electrophysiologist with data on how your ticker was doing. Dads was a bit off and they wanted to do a cardiac work up on him so he could keep on kicking and ticking. Actually, his pacemaker was perfect, it turns out he put the call on hold to talk to my Uncle Richard which caused a lack of data to be sent over to the company.

While in the hospital I asked Bob if I could bring him up anything, in addition to the Daily News, a jelly crueler, coffee and butter, you know the bare necessities. I was instructed to go to the water fountain at 2:00 PM and wait for oxygen Joe who will give me an envelope. I was to take that envelope, open it, count it- twice and immediately put in in the bank, the left bank to be exact.

My family did not believe in FDIC institutions, they were unreliable without a solid failsafe. Only foolish people put their money in banks, smart people cleverly conceal their cash and hid it scattered throughout their house. This was no shoddy practice, like placing your money in the freezer in a Ziplock bag or under your mattress, there was a blueprint with grid and compass for our family fortune.

The left bank was a sock (with the cash which I refer to as the sash) stuffed into a pair of shorts, placed in an old coffee pot, located in the left bottom drawer of the china closet. The right bank, was the sash stuffed into a right-handed glove, and placed in an empty Old Spice After Shave box located on the top shelf in the right cabinet in the china closet. No wonder we always ate off of paper plates, no one was allowed near the coveted corning wear in fear of finding something in the butter dish.

Some days the Good Humor truck would dance down the street ringing its bell and I would run up to dad and ask him for money for a cool treat and was told to get it out of petty cash. Most dads will look in their wallet for .50 but no, inside Fort Knox we had a special place for miscellaneous monetary notions. In the cellar, under the third step was a metal box, inside it was an old Topps Baseball card box, which contained a metal throat lozenge tin that had change in it.

Now if I was lucky and it was a hot day and the line was long, sometimes I could make it from the cellar to the Ice Cream truck before he was on the next block.

Forty years later like a dutiful daughter, I find myself in the hall of dads Senior Housing complex, in front of the water fountain at exactly 2:00 PM. Like clockwork, oxygen Joe rounds the corner with his walker and waves to me with an envelope. This frightens me because that means there is only one arm steering this ship and Joe had his license taken back three years ago when he misjudged the loading dock as a handicapped parking space and drove into the Post Office back room.

Envelope in hand I begin to make my way into dads apartment; shaking and sweating at the same time; I begin counting. There are three singles, two dimes, and a nickel. Something is terribly wrong; dad will not be happy about this. I pop a thin mint in my mouth to wash down the feeling of dread and ring up dad.

Bob must have been waiting for this call because he did not say hello darling when he answered, he picked up the call and said, did you get it? I reply yes and informed him of the contents which he signed and said, Perfect three dollars he borrowed from me and the .25 was interest, now go put it in the left bank and count the money there; Ill wait on the phone while you do this. Sixteen, seventeen, eighteen dollars, with Oxygen Joes loot that makes twenty-one dollars and 25 cents.

I tell Bob the total and he exhales and says Perfect, not a dollar missing, close her up darling and put the change in petty cash, better yet hold on to it and go buy yourself a cup of coffee.

I dont know what the future will bring but tell you this, Im hoping one day when I reach into the freezer and pull out a Breyers Rocky Road container that it is the jackpot!

The post The Bank of Bob appeared first on The Good Men Project.