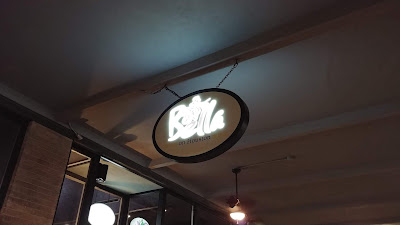 Our first dinner in San Antonio was atBella on Houston. We didn't have reservations but we were seated right away on a Monday between 5:30-6 pm. There is a nice outdoor area but since it was hot, we opted to dine inside. We started with white wine and some bread with olive oil: 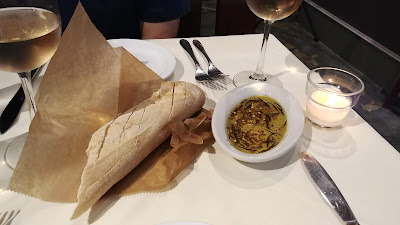 Here's what we ordered: 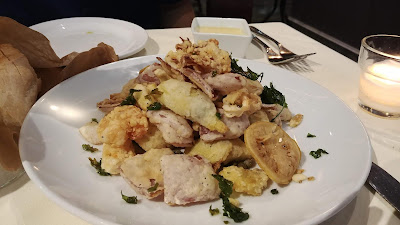 Appetizer: Fritto Misto (Fried Calamari, Shrimp, Artichoke Heart Quarters, Onion Petals & Lemon
Slices, Lemon Caper Butter Sauce). This was OK. We didn't eat the onion chunks. The artichokes were my favorite. I thought the squid was unchewable, way too tough. I had to spit out the piece I took. SP ate all the squid. He agreed it was tough but his teeth are chompier than mine so he didn't have the chewing issue I had (I even chew pudding and mashed potatoes, I need my food well-chewed!). 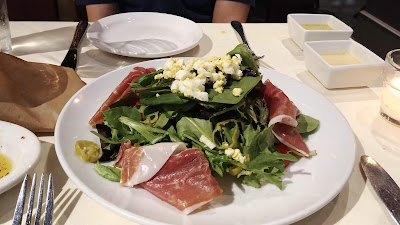 Next up, Salad (Mixed Greens, Radicchio, Cherry Tomatoes, Red Onions, Chopped Egg, Olives & Pepperoncini Peppers, Italian Dressing). We added prosciutto and asked them to leave off the onions. This was a yummy salad. 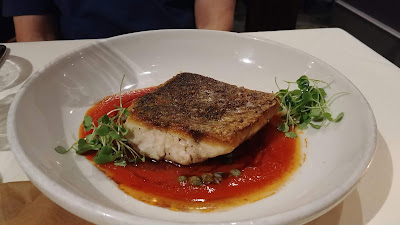 SP's meal: Red Fish A la Plancha (Texas Redfish Seared A la Plancha-Style, Sauce Livornese, Asparagus Coins, Capers, Black Olive Oil). Redfish is also known as red drum or channel bass and it was on a lot of menus in Texas. He said it was good. 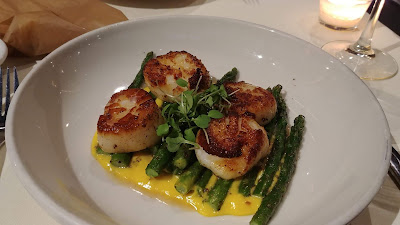 I chose Diver Scallops (Atlantic Diver Scallops Seared A la Plancha-Style, Corn Pudding, Winter Harvest Succotash). Since there was garlic in the succotash, they substituted asparagus, which was fine with me since I like asparagus better. I thought this was just OK. The scallops were a little over cooked, they just weren't as melt in your mouth like as others I've eaten. There was a lot of black pepper on the asparagus, too much for me. This was the case at another place we ate. Perhaps in TX people like their food seasoned with a lot of black pepper? For me, this wasn't a dish I'd order again. 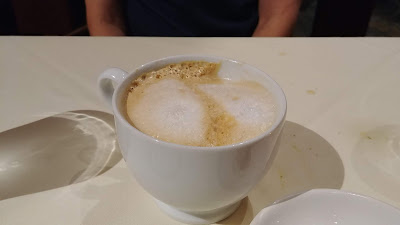 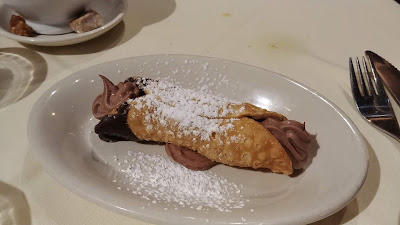 Dessert: Cannoli (Chocolate Mascarpone Mousse). This was one of the best cannoli we've ever had. I really liked the chocolate filling.If we hadn't been so full, we would have ordered another one.

Everyone at Bella on Houston was very friendly and accommodating. It was a nice, leisurely dinner. I may have not picked the best entree but I was trying to avoid too spicy, garlic (allergy), and fish plus we were avoiding beef because we'd already eaten more beef in 4 days than we normally do in a month. That did limit my options (my choice). I would go back if we are in San Antonio again but order different food - except for the cannoli. I'd order two of those.
Back to Recipes
Use left/right arrows to navigate the slideshow or swipe left/right if using a mobile device