The Fight Against Climate Change Starts With Your Diet 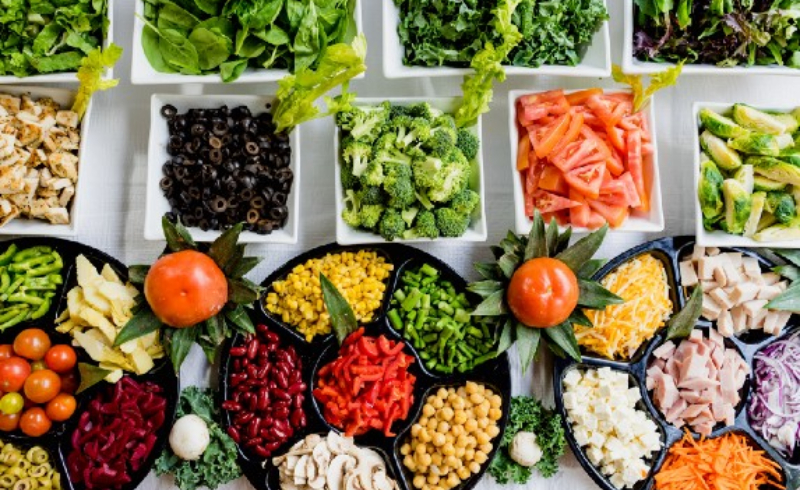 Food has become a fundamental aspect of both our lives and our culture. But we often forget that what put on our dinner table has a huge impact on the planet too: a recent study from the CGIAR (Consultative Group for International Agricultural Research) estimates that food systems are responsible for roughly 30% of anthropogenic greenhouse gas emissions.

To mitigate climate change, it will be therefore fundamental to reduce the emissions coming from our nutrition. This challenge gets even harder if you consider that food production keeps rising every year to keep up with the fast demographic expansion (the global population will be of 10 billion by 2050!). More mouths to feed while reducing emissions, a huge challenge in which we can all already take part starting from our shopping cart.

The impact of food systems

The biggest environmental impact food systems have is through the emission of greenhouse gases. 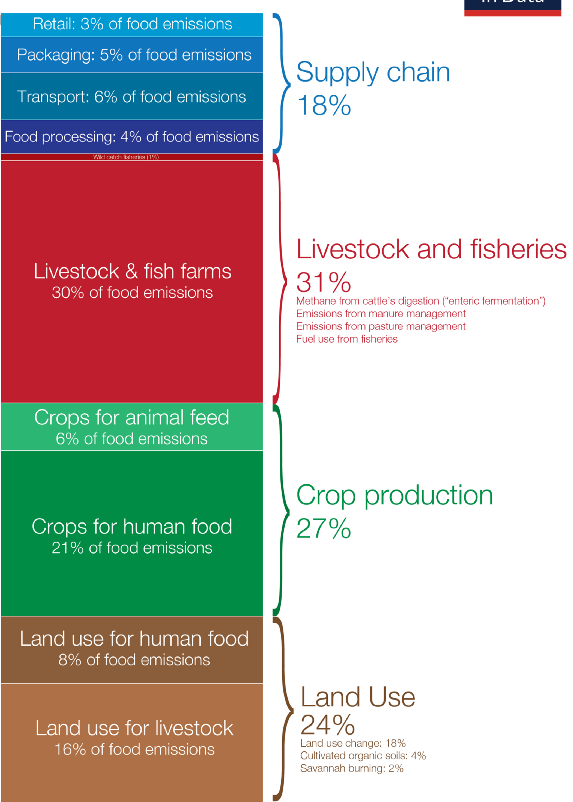 Breaking down the pollution of food systems, based on Science study

The supply chain of animal products (meat, eggs and dairy products) is the main cause of these emissions. Meat and animal products use 83% of the total agricultural land and are responsible for 60% of emissions from the agriculture sector. In particular, meat production accounts for almost 30% of global emissions of methane, a greenhouse gas 20 times more dangerous (for the environment) than carbon dioxide. All of these also add up to the indirect effects those activities have, such as the disruption of forests (the biggest CO2 container) to create more space for pastures.

Another factor for the environmental damage to the planet is the use of pesticides and chemical fertilizers, as they are the biggest cause of nitrous oxide (NO2) emissions in the atmosphere, a greenhouse gas greatly responsible for the ozone hole and about 300 times more harmful than carbon dioxide.

But the most significant factor of food systems pollution remains the waste of food. We produce a huge amount of food that ends up in the trash, more than would be enough to solve the problem of hunger throughout the world, while hunger and food insecurity are still very much a thing in both Africa and Asia. About a third of what’s produced around the world ends up wasted. If we eliminated all this waste, 11% of emissions from food systems would be cut.

The impact of different food 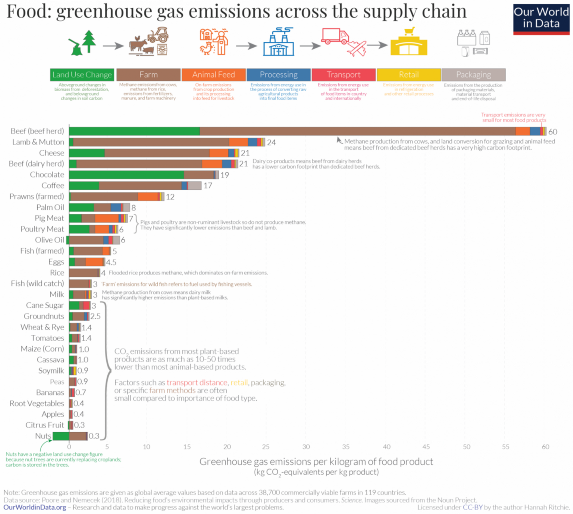 As you can see from the graph, CO2 emissions vary a lot depending on the food that’s being consumed. Animal products generally have higher emissions than vegetables and fruit, especially thanks to the processing of food for livestock. But the real gap between animal and plant based products comes from one main factor: the farming process.

The farming process is what makes beef so bad for the environment: cows and sheep digest food that we humans can’t, and they do that through a process called enteric fermentation. The byproduct of this process is methane, a very powerful greenhouse gas that cows emit when burping.
And methane isn’t good for the planet. It is the second most emitted G.H. gas emitted on the planet at 16% of total emissions, but it traps 21 times the heat of carbon dioxide. And enteric fermentation in the biggest contributor to methane emissions, more so even than the one emitted from burning fossil fuels.

How can you help solve this?

As consumers, we have many opportunities to limit the impact of food systems: we can use our buying power to actually reduce the climatic impact we have on the planet.

A great thing would be to have food labels actually state the climatic impact the food has, a relatively easy thing to do considering farmers already have the tools to measure it. But since we don’t have those (yet), there are a couple of alternative measures we can all take to make our diet a little more sustainable.

The biggest thing by far would be to reduce the consumption of meat and animal products immediately, something that could reduce the emissions caused by our lives by 28%. That’s the biggest life change anyone could do to save the planet. And if you don’t want to go full plant based, at least consider stop eating beef and read meat in general, as poultry and pig meat pollute 10 times less than red meat.

Another thing we all should do is to prefer biological agriculture, a different way of growing plants which completely avoids the use of chemicals, reducing both NO2 emissions and increasing the fertility of the land. The returns of agricultural land are lower in the short term for farmers (which is why it’s often needed an economic incentive), but many studies suggest it’s better in the long run as it improves the land’s prolificacy and it is also a better carbon absorber.

And biological agriculture isn’t great just to reduce emissions, it’s also the key to preserve the biodiversity of the various ecosystems present on the earth. The globalization of food systems and a bigger use of those pesticides have certainly reduced the diversity of animal and vegetal species present, meaning plants and animals are now more vulnerable to parasites and illnesses. The UE has already acknowledged that, and has introduced a logo (“eco-label”) to identify biologic products while also committing to have 25% of its agricultural land dedicated to biological agriculture by 2030.

Also, it’s not always true that eating local is the best thing. Even though eating local does often reduce the environmental impact of food (while also generating positive economic and social outcomes), transportation of food only accounts for 6% of the total emissions from the supply chain. In fact, the notion that “local is always better” isn’t even true: lettuce imported from Spain to the UK during the winter is 8 times less polluting than the one grown directly in the UK because of the use of greenhouses (that consume much more energy). The same applies for other foods: tomatoes produced in greenhouses in Sweden used 10 times as much energy as importing tomatoes from Southern Europe where they were in-season. Eating local does surely help, but it’s definitely not the solution to the problem: if you look at the graph above, even if we eliminate transportation 95% of emissions are still there. It’s still a good thing to do in general, but what I mean is that throwing away a piece of uneaten beef does much worse than eating an avocado from the other side of the world.

The best thing to do in this regard would be to eat both seasonal and local, something that rarely happens as globalization has made us lose the notion of seasonality. But still, that only works with a change in your actual diet.

The one thing you should absolutely pay attention to is food that is air-freighted, which means it emits roughly 50 times more CO2 per kilometer than the same food carried by boat. Fortunately, it’s a very little portion of what’s in supermarkets (estimated at 0.2%), as many of the foods people assume to come by air are actually transported by boat — avocados and almonds are prime examples. How to tell whether something came by plane? It’s usually not written on the label, but food that comes by plane is usually from a far away country and has a very short shelf life, such as berries and asparagus for example (plus it usually costs more).

So, if you want to reduce the carbon footprint of what you eat, avoid air-freighted foods where you can. But beyond this, you can have a larger difference by focusing on what you eat, rather than ‘eating local’. Eating local wouldn’t do much by itself, as a tropical fruit carried by boat would still pollute much less than any local animal products. Eating less meat and dairy, choosing biological alternatives or switching from ruminant meat to chicken, pork, or plant-based alternatives will reduce your footprint by much more.

A lot of food emissions are unavoidable, we have to eat. But we do have a choice of what not to eat.

Previously published on “Greener Together”, a Medium publication.

The post The Fight Against Climate Change Starts With Your Diet appeared first on The Good Men Project.

**Disclaimer – My post often contains affiliate links. All products are ones I like. If you choose to purchase one of these products through the link provided, I will receive a small commission at no extra cost to you. All proceeds help support the blog.